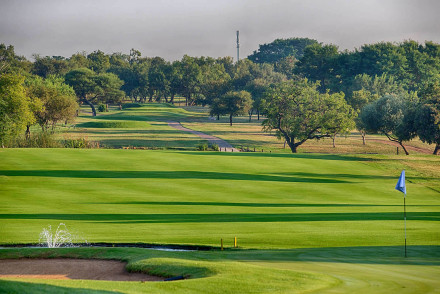 “The SAGA is proud to continue this legacy at one of the most popular stops in the North West Province.”

Substantial upgrades were done to the course, nestled between the richest platinum mines at the foothills of the Magaliesburg range, in 2012.

“We contracted with well-known course specialists Top Turf to resurface all 18 greens with Bentgrass,” explained director of golf, Whitney Dick. “The project began in March and was completed in August. The new greens have settled in very well and we are very happy with the outcome.”

Whitney said that during the upgrades, some holes were levelled out while new slopes were added to others, resulting in a higher level of difficulty at the risk-and-reward layout.

“It is still a very fair course that rewards good shot-making and punishes wayward shots, but now you have to plan and strategize your way around,” he said.

“There are a couple bunkers that will come into play and some out of bounds areas. We also have a natural river that flows from the Kloof and runs through the golf course. This brings water into play on many holes such as one, two, seven, nine, 10, 12, 13, 14 and 15.

“The fourth, 12th and 15th are all drivable par-fours,  although the 12th has water guarding the right side of the green. If they are laying up, there is a river running across the fairway and left of the fairway too. A bad shot there could be expensive.”

The new greens are bound to cause a few headaches, warned Whitney.

“They have a lot of mystery to them,” he said. “They have these subtle breaks and the lines are not as straightforward as they appear; they look to break one way, but then break in the opposite direction. It will take a bit practice to know exactly which way they will break.

“Depending on where they put the pins, a couple of holes could be really tough, most notably the fifth, 15th and 18th holes. The course will demand accuracy and control, but the players should enjoy a good challenge around this track, especially if their shot making and course management is on song.”

The South African Inter-Provincial is played in two divisions, with six teams contesting the A-Section and seven the B-Section. Each team comprises eight players.

The team leading the points table in each section at the end of the tournament will win the respective section. The B-Section winner gains promotion to the A-Section and the team finishing last in the A-Section is relegated.

For the first time in the history of the national team championships, two defending champions will lead the A-Section charge. In an epic final round battle at Port Elizabeth Golf Club last year, Western Province and Boland were forced to share the spoils when both sides finished on exactly the same points and games points.

The other teams competing for A Division victory include Central Gauteng, Gauteng North, KwaZulu-Natal and Southern Cape, who earned promotion at Port Elizabeth Golf Club.

Meanwhile the North West Province will aim to exploit their home course advantage to secure promotion in the B-Division against the teams Border, the Eastern Province, Ekurhuleni, Free State and Northern Cape, Limpopo and Mpumalanga.

General manager Jenny Zimmerman said the club is ready to welcome the 13 teams contesting for this year’s title.

“It is a great honour for us to be hosting this event and we are definitely looking forward to welcoming the participants in this year’s Inter-Provincial,” Zimmerman said.

“Our course is in great condition, our clubhouse staff and catering department is ready for action and our members are looking forward to some spectacular action from the country’s top golfers.

“We are ready to roll out the red carpet. “