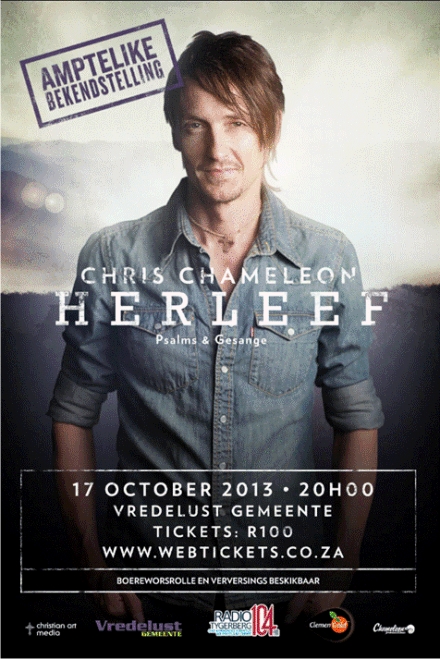 October 2013 marks the release of Chris Chameleon’s ground-breaking studio album titled Herleef: Psalms en Gesange. Teaming up with phenomenal musicians, Riaan van Rensburg (drums), Albert Frost (guitar) and Schalk Joubert (bass), this album beams with 12 new songs, with lyrics inspired by the text of ancient psalms and hymns. Chris brings his four-octave voice, vocal acrobatics and exceptional talent to this delivery, saying: “This is the hardest rocking album I have ever recorded in Afrikaans. I hope it awakens people to the power of God and I hope the unifying cement of music makes us look beyond our differences and into each other’s hearts.”

Talking about the song selection and his heart behind the album Chris adds, “I decided to record some of my favourite psalms and hymns, not just because they seem to be disappearing from our general worship, not because I have always wondered what they would sound like if I composed them anew, not only because they take me back to a time when I believed purely as a child does, without the questions of an adult mind, but because since then and until this very moment they stir my soul and bring me into an intimate conversation with my Creator.”

What is most rewarding about Herleef: Psalms en Gesange is the spiritual depth and thoughtfulness of each song. Chris and the band spent 5 days in Sunset Recording Studios in Stellenbosch, where they worked through the night to complete the album. “I can’t help but feel that the process was exceptionally blessed from the onset. It was composed with great ease and recorded expertly in record time. The process has never gone so smoothly and effortlessly for me before,” adds Chameleon.

Why the title Herleef? “These songs seem to be disappearing from our services. I feel they have much value from a Christian viewpoint as well as a cultural one. Herleef (meaning “revive”) refers specifically to my wish to give new life to these texts. It also refers to my hope that it will ignite a new interest in these words.” The oldest of these hymns are from the 1920s, and written by Totius, one of Afrikaans’ most notable poets.

The fourth track, Landpsalm, based on Gesange 36, is a very special surprise on the album. The song was recorded in 3 different studios with 6 different artists and is a clear reminder of the all-inclusiveness of God’s Word and the oneness of His children. Chris brought in a wealth of talent when he chose to collaborate with several well-known artists on this special song including Laurika Rauch, Loyiso Bala, Neville D, Theuns Jordaan, The Soweto Gospel Choir and  Bobby van Jaarsveld. The lyrics read: “Behou dan almal wat hier woon, in liefde tot mekaar, en laat geregtigheid die band van eenheid steeds bewaar” (“keep safe all who live here, in love towards one another, and let righteousness still protect the bond of unity”). Chris believes this song holds an extremely important message for South Africa: “We live in a country where divisions are more pronounced than in most other places on the planet. We live in a country with many open wounds and daily challenges to not have them scratched open again. This song goes beyond the lie of our differences and unites us in a common goal of humanity under the beautiful message of Christ’s love.” Listen here

Once again Chris Chameleon delivers an album for a varied audience. “I have 4-year-olds and 80-year-olds attending my shows.” This album is slightly rockier in sound than his previous album, and he is interested in hearing the reaction from his more mature listeners, but is not worried … “I have been surprised by their choices in the past. Oud is definitely not koud is what I have learnt from my audience!” says Chris.

Reminiscing on his childhood years spent in church Chris adds, “I was, probably like most children, rather bored in church. Churches weren’t very child friendly in those days and it was a staid affair with old folks waiting to wallop you if you got restless. But then there came the time when I started being able to process the information and participate in the beliefs. That was a very exciting process.”

Chris Chameleon is not one to plan much in his career, especially with albums going forward, however with more than 450 psalms and hymns he feels that there certainly is no shortage of material waiting in the wings. There is also a possibility of a translation of this album into English in the near future. Chris laughs as he tells of an anecdote from the recording process, “I was in charge of the production and that is a fairly authoritative position which requires firm and unwavering action. At one point, whilst in my high chair, barking orders, I leaned back in a motion of self satisfied accomplishment and the chair tipped over leaving me on my back with no dignity let alone authority. It was quite funny and I prefer to see it as the Big Boss reminding me of who is really in charge.”