Following the big news of the magnificent international line up for RAMfest 2014, we are happy to announce that some weighty, talented SA Bands and DJ`s have joined the stellar list of performers.  Just to make you want to count down the days to the blazing thunderous joy that awaits you even more, here they are:

(note: Red Huxley and Infanteria will be in Cape Town only, Facing the Gallows in Johannesburg only, and the rest of the bands/Dj`s will be performing in both Cape Town and Johannesburg.)

Nate Raubenheimer, better know as Protoculture, was ranked as the number one DJ in South Africa in 2011 and 2012 according to the acclaimed international DJ Mag Top 100 Polls. Nate has rocked dance floors everywhere, most notably at festivals such as Glastonbury and Glade in the UK, Universo Parallello on the beaches of Bahia, Brazil, and also in clubs and super clubs alike, such as Ageha in Tokyo and Privilege, Ibiza. Nate has also played alongside a diverse range of international heavyweights such as Paul van Dyk, Sasha, Paul Oakenfold, Armin van Buuren, John 00 Fleming, Orbital, Future Sound of London, Juno Reactor, and Sander van Doorn to name but a few. His 2010 rework of ‘Grace – Not Over Yet’ with Max Graham landed the number 1 slot on the DMC UK Club Charts as well as the number one position on the ‘Trance Top 100’ at beatport.com where it stayed for an entire month. Other chart topping successes include remixes for Canadian rock icon, Bryan Adams and LoverushUK’s ‘Tonight in Babylon’ and Estonian pop star, Hannah. 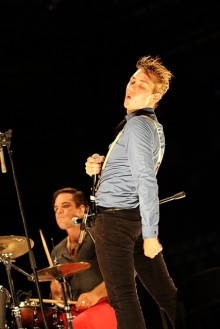 RAMfest 2014 Ticket sales are open: Available here: http://goo.gl/wuiZKF,  from www.ramfest.co.za or plankton.mobi. The ticket prices will vary during the next few months, the earlier you buy your ticket, the better the price. Only valid ticket holders can take part in merchandise competitions on RAMfest social media pages. All tickets for CT and JHB include full weekend camping.