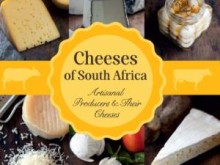 Perhaps I should admit to a lifelong addiction to cheese – of every shape, size and flavour – before reviewing this title? So, not surprising, then, that I relished not only the photographs of appetising cheeses, but those of their makers and even those of the milk sources, in the form of nimble goats, doe-eyed cows and incurious sheep.

Typically, it took France to recognise the gastronomic contributions of South Africa’s Mr Cheese, aka Kobus Mulder, having showered on him no fewer than three awards, including that of Chevalier de l’Ordre Mérite agricole de France.

Back home, many an adventurous farmer acknowledges the debt owed to him for constant encouragement and support as they started experimenting with artisanal cheeses.

Today Mulder takes those cheeses to the Olympics in the UK and the cheese Oscars in the US, where they collect their fair share of bronze, silver, gold and double gold medals.

Along with training cheesemakers in France for the past 10 years, Mulder does his bit for Africa by teaching cheese-making to men and women who may own just one cow.

He has helped to double the income of families in Mozambique, Tanzania, Rwanda, Uganda and Malawi, where international tourists now enjoy locally made cheeses in hotels and game parks.

Given his hectic schedule and the fact that he lives part of the year in France, local palates can be grateful that Mulder found time to feature the 22 artisanal producers in this appetising book .

After a discussion about artisanal and industrial cheeses, the introduction outlines the seven basic manufacturing steps and highlights the benefits of milk from goats, sheep and buffalo.

Many consumers who are allergic to cows’ milk can enjoy cheeses made from other milk sources.

Since 1995, South Africa’s per-capita cheese consumption has increased from 1kg to 1.9kg, and consumers have embraced more unusual styles and flavours. Both these factors have been greatly helped by the annual SA National cheese festival, which has attracted ever-greater numbers of visitors each year since the first event in 2002.

Mulder’s journey to innovators and visionaries who make our finest cheeses starts on the Garden Route, where Aidan Pomario makes both hard and soft cheese that he sells at the famous Wild Oats market in Sedgefield.

He uses raw goats’ milk and a vegetarian rennet and Mulder rates his range highly, adding that he has been known to drive many kilometres with groups of French connoisseurs to enable them to sample Pomario’s winning cheesecake.

The Knysna area is also home to the Metelerkamps – who make a fine mature Cheddar called Vastrap and other creamy Ganzvlei cheeses from raw milk of their Jersey herd – and Eva Dry, who produces Cloud Cottage chevre on her impressive farm, run on biodynamic and organic principles.

Outside Napier in the Overberg, Brenda Shelley and Jacqui Weilenmann also keep goats, and built a Swiss-style farmhouse that houses animals on the ground floor and people on the upper level. They open the farm to the public often, so children can meet the goats, and produce a caciotta in 16 flavours and a semi-soft peasant cheese that Mulder savours.

On Lourensford estate near Somerset West, James Healey makes his mature farmhouse Cheddar, which soon found popularity, while outside Stanford the Lourens family of Klein River have well established their brand of cheeses, with South African gruyere a firm favourite.

Wayne Rademeyer has enjoyed wide publicity since he started keeping water buffalo on his farm near Wellington. He wanted buffalo mozzarella and this, it seemed, was the only way to get it. This self-taught farmer has succeeded in making top-quality mozzarella, ricotta and fromage blanc, stocked by some delis in the Western Cape.

The Vissers of Simondium are equally renowned, having firmly placed their Dalewood Fromage on the local and international map.

Staying in the Boland, Mulder also savours the products of the Foxenburg estate near Wellington, where goats forage in a private nature reserve.

Gay van Hasselt’s delectable mature goudas, produced from her Guernsey herd, are among Prince Albert’s top attractions, also proving that the Karoo can produce cheese equal to the best.

They started with lessons in halloumi production from a Cypriot, refined it and delivered a batch to a farmstall where, by coincidence, Kobus Mulder stopped and tried it.

He also likes their feta, gouda and pecorino.

Near Smithfield, travellers will find one of our pioneer producers of sheep’s milk cheese: Elmarie van Aswegen’s Pecora Africana has a special place in Mulder’s heart.

Among the Highveld producers included are Norman and Rina Belcher, whose Belnori cheeses have attracted numerous awards, both here and overseas. Their goats are referred to as “the ladies”, while another herd, living in the Magaliesberg valley, is the source of more winning cheese made under the Goat Peter label.

Hijke Cheese, made in the Dutch tradition, can be found at Doornkraal, where Hester Hoogendijk makes 20 varieties.

One of the best-known names in the cheese world is Chrissie Briscoe – an eccentric doyenne who farms near Richmond in KwaZulu-Natal.

The garden province is also home to Indezi River cheeses and the popular Swissland cheese, both farms sited in the Midlands.

Mulder answers an oft-asked question as to his personal favourite: “…unpretentious cheeses made from clean, raw milk with well-defined flavour profiles. Anything from a three-day-old fresh stretched curd to a five-week-old soft washed-rind or a 10-month-old hard brushed-rind cheese…”

Ask South Africans to list their favourite cheeses and the results are likely to include Camembert and blue, pecorino and haloumi. Two decades ago the answer would have been Cheddar and Gouda – what else is there? The revolution has been one of quiet but diverse and delectable progress. – Cape Argus