SOUTH AFRICA (October 2013) – “When we lend a helping hand, maybe we’ll begin to understand what is right and what is wrong. And when we dream another’s dream, instead of doing our own thing, maybe we’ll sing a different song and WE’LL BE MORE OF WHAT THE WORLD NEEDS!” These are the lyrics of the official Pink Trees for Pauline song. Not just beautiful lyrics to be sung on a stage somewhere…but what we saw happening all over South Africa and Namibia during recent weeks made it clear that people care about each other, and there is still hope. Despite all the pain, heartache and despair cancer may bring to people’s lives, one still sees the hope in all the faces of people wrapping trees, and even each other, in pink. 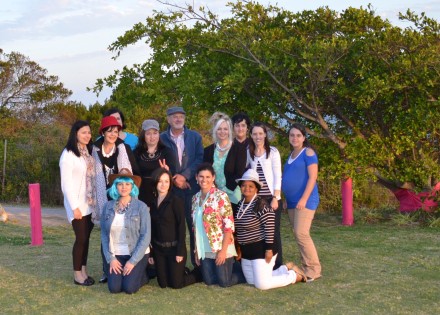 Estée Lauder Companies became a partner in the Pink Trees for Pauline initiative in 2013 and brought awareness to the campaign in the month of October. On 18 October 2013 the national celebrations of the Pink Trees for Pauline project took place all over South Africa and Namibia. At that stage no less than 170 000 trees were already covered in pink and the wave is still rolling on… 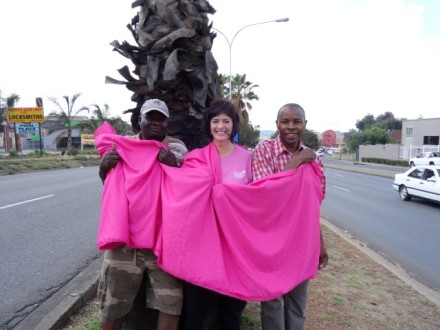 The reports that came in from all over the country carried an incredible message of caring, support, love and hope.  From Schweizer Reneke it was reported that this project again confirmed to them what neighbourly love really is. During this time they focussed intensely on supporting those in need struggling with cancer, and especially those that were without a friend in the world. Pink Trees for Pauline touched the hearts of their farming community in a time of severe drought and everybody contributed. A pink flame of hope they call it… 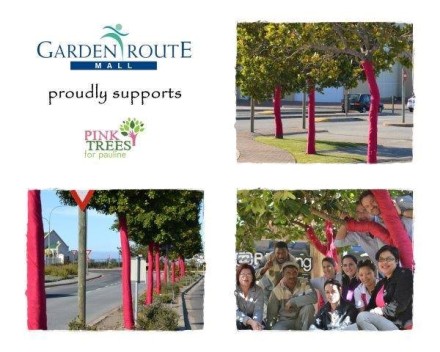 And what better way to celebrate hope than with a feast? That is exactly what De Rust is going to do at the end of October. The community of De Rust will be setting the longest feast table ever, up and down the streets of their town, obviously dressed in pink! They are expecting the whole community of De Rust and Oudtshoorn to attend this feast…everybody dressed in pink, arriving with picnic baskets and enjoying the merriment. 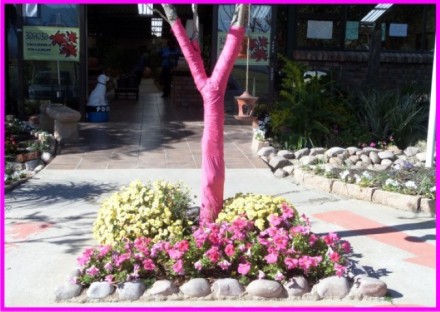 From Albertinia, Malmesbury, Pofadder and even as far as Outjo everybody involved in the Pink Trees for Pauline project confirmed that they experienced a spirit of love and caring. Friendships were formed between people from all walks of life. Cancer communities united in this national awareness and fundraising campaign and strangers became friends during this touching journey.  From Port Elizabeth it was reported that the pink symbolises new life and new hope after being diagnosed with cancer.  Every precious gesture, a faraway friend asking someone to wrap a friend awaiting test results in pink, made hope seemingly more tangible.  Pink Trees for Pauline is not only an awareness campaign, but according to many volunteers also a symbol of support, healing and remembrance.

Most certainly it is the passion with which people embraced the Pink Trees for Pauline project that stirs our hearts the most.  Whenever a child shows initiative and gets involved to help those affected you expect the world to stop and take note.  Loborious Bopape, a grade 11 learner from Ben Vorster High in Tzaneen touched many hearts with his passionate efforts to raise funds. He orchestrated the purchasing and folding of pink ribbons and raised funds with which to help those affected in his town.  With children like Loborious there can be no denying that there is hope for the future!
Adri van Nieuwenhuizen, gifted songwriter and co-founder of the Pink Trees for Pauline project, wrote “Every time I carry you, I am stronger than before. I can survive and live my life much more”. All over South Africa and Namibia cancer communities are now more than ever united against cancer…taking powerful strides towards the future, eyes gleaming with hope.

If you need more information regarding Pink Trees for Pauline contact Adri van Nieuwenhuizen on +27 82 460 6386 or email adri@pt4pauline.co.za. Visit facebook.com/PinkTreesForPauline for the newest information.