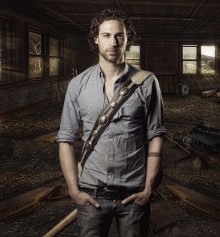 Fresh from a highly successful European Tour with sold out venues, musical virtuoso Dan Patlansky is preparing for a blockbuster set of South African shows leading up to The Dan Patlansky Guitar Weekend to be held in Clarens (6 – 8 December) and Stellenbosch (13 – 15 December).

The Dan Patlansky Guitar Weekend is a three day event where 30 fellow guitarists and attendees will have the chance to hang out with Dan Patlansky and attend group workshops covering various subjects, including Improvising, Licks and Riffs, Chords and Harmony, and Tone and Gear.

Also included is a semi private lesson where the student decides what he or she wants to cover, plus many hours of jamming with other people that share the same passion for guitar playing.

“Guitar lovers can look forward to a bigger and more engaging installment of The Dan Patlansky Guitar Weekend this year. With sponsors such as Music Connection, Protea Hotel Stellenbosch and SAB/Castle, this year’s edition promises to be even more memorable and I for one cannot wait for December,” said Dan Patlansky.

The Dan Patlansky Guitar Weekend is open to guitar lovers of all ages and playing levels. Those attending will be required to bring along their guitar (electric or acoustic), an amp, bedding (if attending Clarens) and some spending money for the cash bar and for meals not covered over the weekend.

There is a minimal cost of R2 450 per person for spending an entire weekend learning from the celebrated musical talent that is Dan Patlansky.

Dan Patlansky’s success is hardly surprising. In 2013 he released his first acoustic album, Wooden Thoughts, to critical acclaim, launched his own online store to deal with the demand for his music and won the only Gold Ovation award at the 2013 Standard Bank Ovation Awards announced at the National Arts Festival in Grahamstown. The same year he made waves in Europe and Scandinavia, attended the Horsens Blues Festival in Denmark – where he was recently invited back to perform – and, in Hannover, performed at the legendary Blues Garage alongside big names such as Joe Bonamassa. After his 2012 album 20 Stones was voted the 10th best album (out of 20) on Blues Rock Review, the editorial team invited Patlansky to be a writer on their blog site and he continues to write for them.

To book for either of the weekends, contact Susan at dpguitarweekends@gmail.com or call 076 412 6536.