Visitors can anticipate an unrivalled culinary showcase in the grand marquee situated on the lawns surrounding Franschhoek’s iconic HuguenotMonument, while local winemakers offer the finest Méthode Cap Classiques (MCC) to emerge from the wine cellars of South Africa.

Adding to the excitement of this year’s festivities visitors can look forward to meeting celebrated Veuve Cliquot winemaker, Pierre Casenave, who will be making an appearance at their stand each day between 12pm and 1pm. The Veuve Clicquot Champagne House situated in Reims, France is internationally recognized as producing one of the world’s finest Champagnes. A meet and greet certainly not to miss out on.

Visitors to the festival will be treated to an array of gastronomic delights presented by the local restaurants that have firmly entrenched Franschhoek’s status as one of the world’s premier culinary destinations. Some of the participating fine dining restaurants include well-known establishments, amongst others, such as Bread & Wine, The SalmonBar, Haute Cabrière, Le Franschhoek, L’Ermitage and Mont Rochelle.

A short wander down the main road in Franschhoek will uncover world-class shops and boutiques for an intimate and relaxed shopping experience, while the many winefarms within easy reach of the village add to the appeal of a weekend of celebrating Cap Classiques. 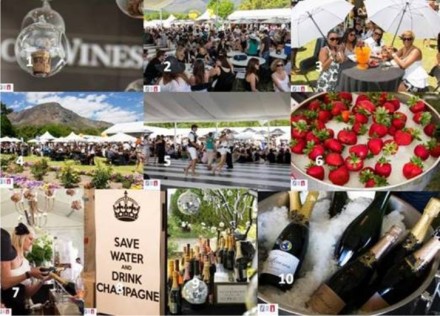