Click to tweet about this
SABC3 is adding an exciting, new comedy show to its star studded line up. Loitering in Jozi is a one hour show staring popular comedian Marc Lottering and is due to start airing on Thursday 14 November at 20:00 and will run for 13 episodes. 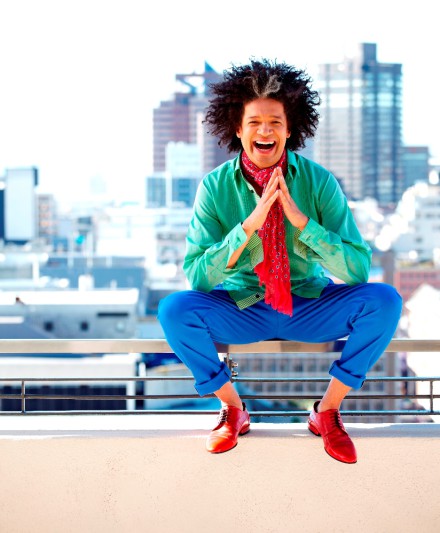 Funny man Marc Lottering needs little introduction to South African audiences. A regular feature in line-ups for live comedy festivals, he has kept audiences in stitches across the country for the past 15 years.

“We pride ourselves on having best South African talent on our channel and we cannot wait for this hilarious show to begin”, added Risuna Mayimele, Marketing Manager for SABC 3.

Marc Lottering plays the lead in this comedy drama series set in the world of Sandton’s elite. He relocates to Johannesburg from Cape Town to pursue his career in the entertainment industry, only to find himself the victim of mistaken identity.

This leaves him penniless and homeless. Fortunately, a university roommate (the obsessive compulsive fully grown trust fund baby Alfie) has a spare room, and so the two unlikeliest of friends wind up sharing an apartment.

This Donatello Towers is no ordinary building-the filthy rich live side by side with those who serve them. Marc is the fish-out-of-water in this world of opulence – all he wants is to achieve his dream of becoming a rock star comedian, but at the rate he is going this may take quite a while…

Marc
Marc is from Cape Town, brand new in Jozi and thinks he will make it big as a stand-up comedian in no time at all.
He soon realises that things won’t be that easy. To begin with, he has nowhere to stay and no money at all – his first gig fell through.  He cannot go back to Cape Town. The shame of not having seen his name in lights would be too much to bear.
He urgently needs a roof over his head and his former varsity pal Alfie, who lives in a fancy Sandton apartment, is his only resort.  Marc just has to bear Alfie’s obsessive compulsive behaviour, as he gets to know the weird characters living in the fancy apartment building.  But he hasn’t given up on his dream to become a force to be reckoned with in the world of entertainment…

Alfie
In trust fund baby Alfie’s world things have to be clean and neat. Very clean. In fact, he is obsessed with cleanliness and tidiness..  His obsessive compulsive behaviour drives Alfie’s day-to-day routine as he spends virtually all his time time in his up-market Sandton apartment.  Since he has no job and no real purpose, he focuses all his energy on keeping things spotless and organised.  His world is turned completely upside down when his messy, carefree roommate from university, Marc, pitches uninvited and moves in with him.

ep1 The Squat
Marc arrives in Jo’burg to star in the yearly pantomime – his first real acting job. His obsessive compulsive friend Alfie lets him move in – temporarily. The role in the pantomime is a disaster and before long Marc is penniless and without a roof over his head…

ep2 The Maid
In Marc’s opinion Alfie’s helper is taking advantage of her kind employer and not doing much at all when she is at the apartment to clean the place. Marc makes it his personal mission to teach her how to do her job. This does not go down well at all.

ep3 Party like a Rockstar
Marc and Alfie go all out in an attempt to party it up with a group of youngsters in the building. To Marc’s dismay they think he’s ancient and he goes all out to prove them wrong. Alfie’s also fired up and tries to show them that he can organise a better jol than any of them.

ep4 From Russia with love
When Marc damages Alfie’s father’s car, he enlists the services of a local Russian Mafia boss to get it fixed. The girl Alfie is dating turns out to be the jealous Russian’s ex-girlfriend. This sticky situation could have life-threatening consequences…

ep5  The Dinner Party
Marc finds Jo’burg people very unfriendly, so Alfie organises a formal dinner to introduce him to the people in their building. Only three arrive – an old woman who has her eye on Alfie, a body-builder and a racist old guy. The tensions mount, with hilarious consequences.

ep6 Veggies for life
Alfie and Marc decide to change their lifestyles when their friend Kabelo mistakes heartburn for a heart attack. Only being allowed to eat veggies and having to do hours of Yoga on end is not Marc’s idea of fun, so he has a plan or two up his sleeve…

ep7 The Entrepreneur
Marc brings home a lost dog and Alfie needs a massage to get over the stress of having an animal in his pristine apartment. The masseur has barely arrived, or Marc goes into business with her. She and and Kabelo help Marc sell body cream to a group of Asians.

ep8 The Waiter
Marc lands a job on an infomercial and decides to celebrate with Alfie and their friends. They go out to a restaurant for a fancy meal, but things quickly go haywire when Marc gets the poor waiter fired, although he didn’t mean to.

ep9 The Baby
Nine months ago Alfie woke up next to a woman after a party at his flat. And now she’s at his door, pregnant! Marc is extremely worried that if the girl moves in, he will have to move out.

ep10  Death by Gorilla
Marc has had enough of the pranks Alfie keeps pulling on him. He decides to get Alfie back once and for all and gets everyone in the building involved in his plan.

ep11 Christmas
Alfie invites Marc’s Auntie Jean to visit over Christmas.  Auntie Jean moves in and she refuses to leave. Marc has no choice but to enlist the services of a Russian Mafia boss to get her out of there.

ep12 She
Marc finally gets a break to do stand-up comedy at a club. He shares some of his jokes for the show with one of the other comedians. This proves to be a major mistake which does not help his career as a stand-up comedian at all.

ep13 Friends
Alfie wants to be more than just friends with Lauren, so Kabelo attempts to teach him the art of how to seduce a woman. Marc tries to fix a dripping tap, but before long the building is without water, a fact no one is happy about…