Many years of loyalty, hard work and dedication was rewarded on February, 2nd 2013 when full affiliate status was awarded to the South Western Districts Cricket Board at the Cricket South Africa Annual General Meeting. SWD Cricket has been awarded associate status by Cricket South Africa (CSA) in the 2004/05 season and has since grown into a formidable Union to be reckoned with not only on the playing field but in terms of administration as well. 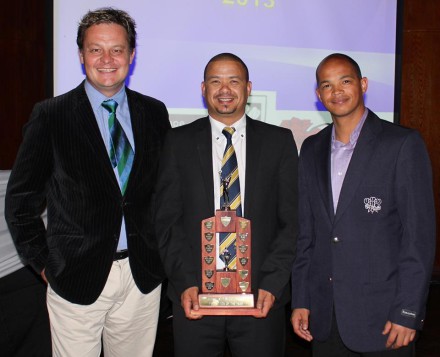 This growth from its infancy as a rural Sub-Union of Boland in 2001 to its current position of an exemplary province embodies the energy and vision of the young, but involved collective leadership that permeates throughout the whole cricket fraternity in the province.

The SWD Cricket Board has:

In October 2012 the construction of new cloakrooms and players suites has been completed thanks to grants from the National Lotteries Distribution Trust Fund (Sport and Recreation) to the value of R750 000 and R300 000 from a new partner, the SA Sports Trust.

The flagship team, the SWD senior team had another good season in the Cricket South Africa provincial Three Day competition where the men from the Southern Cape again came very close in winning the trophy. The individual performance of Marcello Piedt who bagged 59 wickets in his debut season of first class cricket must be complimented. The 19-year old Piedt was also awarded with an inclusion in the CSA National Academy intake for 2013.
Jean Heunis was selected for the SA Schools XI last year after the U/18 Coca Cola Khaya Majola cricket week and we also continue to produce players for the Warriors Cubs and Warriors Colts teams. These achievements are evident that our development and coaching program is indeed on track and that we do have the ability to produce players on the highest level.

The 14-year old Miceala Andrews was included in the SA Schools Girls team and a bright future is awaiting her.

The SWDCB also in July 2013, for the first time, hosted the CSA National Groundsman Conference in Oudtshoorn. It was attended by all groundman from the main stadiums in the country.

The SWDCB in the past financial year (2012/13) spent significant resources in enhancing the total spectrum of club cricket in the province. Club cricket forms the foundation of cricket structures in the province and is the SWD’s strategic plan directed to provide opportunities for effective and active participation for all affiliated clubs to enhance a competitive cricket culture. The financial support towards clubs essential for the sustainment of cricket in the province and the SWDCB invested in various projects and programs.

The expenditure to clubs increased from R265,000 in 2011/12 to R870,000 in 2012/13. This figure made provision for an increase in grants to clubs but specific infrastructure projects (playing and practice facilities), investment in coaching programs, provision of pitch covers, cricket and training equipment, and cricket balls for leagues, transport grants as well as maintenance projects.

A new initiative was the introduction of the Club Excellence program where clubs were awarded with financial incentives in reaching specific objectives in an outcome based funding program. This program placed an emphasis in proper administrative and governance structures at clubs as well as the training and recruitment of officials such as umpires, scorers, coaches and ground staff. A further nine clubs will join the club development program this season. This is an initiative that is funded by the Western Cape Department of Cultural Affairs and Sport.

As part of the SWDCB development plan an emphasis has being placed on the development of black Africans cricketers in the district. This goal is justified by looking at the racial mapping in the district and the participation in the different league structures, this imbalance is a factor inherited from the past political situation of our country. The Board has made significant progress to improve the situation and to promote a game played by all in the district and promoting a proud culture.

Facility building was accelerated in the community be it on school properties or on municipal entities. The construction of practice nets and playing facilities was introduced in Bongolthu, Thembalethu and Kwanonqaba. The completion of these facilities in s also a huge step forward in the quest to ensure the interest of the game increases in the communities.

Its only being four seasons since the office of the SWDCB has being running the program out of its administrative office and both Thembalethu Cricket Club and Bongolethu Cricket Club finished third in their respective legs of the promotion league during the past season. The SWD Cricket Board also appointed Black African Cricket co-ordinators in Bongolethu, Thembalethu, KwanonQaba and Bitou. They are responsible for the coaching, coordination and growth of the total Black African Cricket Development program in the region/club/schools

Regional Centre of Excellence Coordinator/Coaches was also appointed in Oudtshoorn, George, Mossel Bay and Knysna and are responsible for the management of the regional age group cricket teams in conjunction with administrative functions that will be fulfilled by the SWD cricket office. The must build and maintain strong relationships with the parents, schools and Clubs and is responsible for the coaching and coordination of the total Women’s cricket program in the region. It will also be required of the successful candidate to manage, arrange and attend all scheduled fixtures of the regional team as applicable.

Capacity Building for Coaches. In an effort to promote the standard of coaching in the province the coaching education program of the province was enhanced by introducing:

• Four level 1 Training courses;
• Two Level 2 Training courses;
• Additional coaches will be nominated for the level 3 course. These nominated coaches to have attended the refresher sessions prior to the course to prepare them adequately;
• Appoint two Course Facilitators to help conduct Training Courses;
Coach Effectiveness
• All coaches belong to a coaching forum;
• 75% of Coaching forum meetings,
• Attend a refresher course in this year to be
• Appoint Forum Coordinators per region to coordinate meetings and courses;
Club Effectiveness with regards to Coaching
As part of the club excellence program, clubs must have 4 coaches per season attending and
passing a coaching course for qualification to funding;

SWD Sport council. The SWD Cricket Board is an active participant in SWD Sport Council Activities and events.