Mango Groove are delighted to announce that they will be performing a once-off concert in Cape Town in 2013 at the Kirstenbosch Botanical Gardens on the 22nd of December. 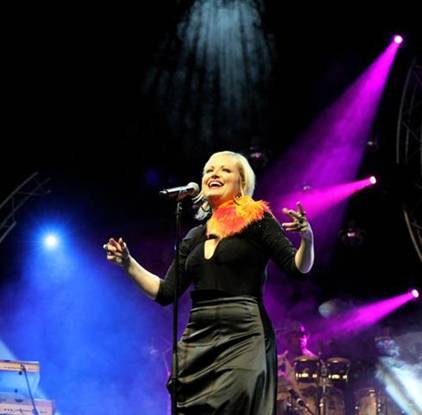 In the words of Claire Johnston, ‘’Kirstenbosch is undoubtedly one of our favourite SA venues, and it has become a bit of an annual institution for us. An exquisite natural setting, amazingly warm and responsive audiences, and all of this in one of the most beautiful cities in the world: heaven!’’

It has indeed been an exciting few months for the group and for Claire in particular. A recent career highlight for the group was when they hit the main stage at Oppikoppi for the first time in August this year. In founder member John Leyden’s words:

“We had some trepidation about the show, as we weren’t really sure that we were a ‘Koppi-type act. I can tell you in all honesty, however, that it ended up being one of our favourite concerts in the group`s history. According to the organisers, it was the biggest crowd a single act had drawn in the 19 years since Oppikoppi`s inception and the audience was just mind-blowing in their response: twenty thousand people sang every song back at us (we couldn’t even hear ourselves on stage at the time!), and we got called back for a huge encore. Truly a precious memory for us.’’

A couple of key Mango Groove concerts aside, it has also been a very significant year for Claire personally. She has spent the last few months working on a solo album which is a celebration of great South African songs through the decades. The album is due for release in February 2014, and features a host of South Africa’s greatest artists collaborating on key tracks. Again in Claire’s words: ‘’It has been an honour, a privilege and a hugely humbling experience to work with the artists who so graciously agreed to collaborate with me on the key songs: Zolani Mahola, Theuns Jordaan, Juanita Du Plessis, Kurt Darren, Rebecca Malope, Romanz, Tsepo Tshola and Vusi Mahlasela. These are all such iconic performers and it meant so much to me that they agreed to come on board.’’ Expect more details soon on the release itself, but safe to say it will tie in closely with certain live performances, and with Mango Groove’s own itinerary over the next few months.

With regard to upcoming concerts, Mango Groove is also excited to announce that the group will be embarking on a massive Australian and New Zealand tour in February/March 2014. The tour will take in all the major centres, and it will be over 15 years since the group last toured that region. In the words of Kelly Petlane, Mango’s iconic penny whistler, ‘’we can’t wait to get back there! The social media feedback so far has been huge, and there is a fantastic buzz around the shows.’’ The shows will take in all the major Oz and NZ cities, including Sydney, Melbourne, Adelaide, Perth, Wellington and Auckland. All details will announced soon on the Mango Groove website www.mangogroove.co.za and on Facebook www.facebook.com/mangogroove

Tickets for the Kirstenbosch Concert are available from www.webtickets.co.za