Blue whales in a splash pool they may be, but, such is the way the wheel of fortune turns, very few schools rugby followers would deny the Garden Route giants Oakdale and Outeniqua their place in the current Western Cape top four along with the two Paarl giants. 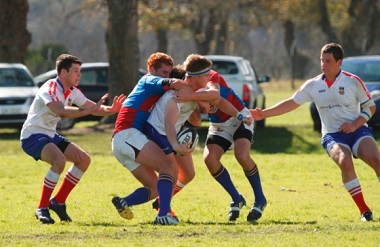 It is thus hardly surprising that matches between the four – and against common opponents – will be both eagerly anticipated and subsequently used as the yardstick by which to compare their relative strengths.

The recent (rather belated) official release of the 2014 fixtures for the Three Big O’s – Oakdale, Oudtshoorn and Outeniqua – gives both Eagles aficionados and neutral observers the opportunity to focus on the key dates in what promises to be a memorable year for schools rugby in the heart of the Garden Route.

Unfortunately Oudtshoorn is still very much in a rebuilding phase after the halcyon years of the Percy Williams era. On the other hand, perennial juggernauts Oakdale and Outeniqua are expected to be not only as strong as, but also more evenly matched than at any other time in the last few years.

more evenly matched than at any other time in the last few years.

If you don’t believe this contention, just consider two short periods which shaped the 2013 campaigns of all four of the heavyweights referred in the opening paragraph.

It took only two weeks (13-27 April) to disabuse an Outeniqua team widely expected to sweep virtually all opposition aside of any such pretentions. Paarl Gym’s 37-25 triumph against the Quaggas (on the latter date) in George gave a huge boost to the morale of the Noorder Paarl outfit, given archrivals Boys’ High’s 36-45 defeat at home to the Piet Cloete’s men a fortnight earlier.

Slightly later (18 May to 8 June): Oakdale suffered a humiliating 10-38 thrashing at home to a rebuilt Boishaai team barely one week week prior to an unsuccessful visit (7-13) to Outeniqua, but showed their legendary determination by having the better of a 17-17 draw against Gym in icy Paarl fourteen days later. Lesser sides would have collapsed in a heap.

The comparisons will start as early as the opening day of the 2014 domestic programme – on Saturday 12 April, to be exact – when Outeniqua host Paarl Boys’ High and Oakdale entertain Paarl Gym ! It is no exaggeration to suggest that these two fixtures may make or break the Western Cape Big Four’s campaigns.

An extended local break follows, during which both teams will be strutting their stuff at Wildeklawer. The Bulle play Noord-Kaap and Affies; the Quaggas, Grey College and Glenwood.

After the exhaustive SWD trials process, both sides have a brief lull, a sort of “Gentlemen,-start-your-engines” weekend with Oakdale visiting HTS Drostdy and Outeniqua hosting Stellenberg on Saturday 17 May before…

Saturday 24 May, which is D-Day, as Malan du Plessis and Tommy Dixon’s troops welcome Outeniqua to Riversdale over the former’s rousing Akkerfees weekend.

While the object of this article is not to analyse the two teams’ strengths and weaknesses, only a fool would deny that playing Oakdale at their citadel is already an uphill battle. With the reunion hordes added, opponents are up against virtually insurmountable odds !

Just to keep them honest, one week later the Quaggas have to face the second half of a double-whammy when they visit Paarl Gym

Sadly, the slightly shortened fixture list does not make provision for Outeniqua vs Paul Roos (again) or Oakdale vs Paarl Boys’ High, meaning the only other threatening opponents these two sides have in common are EP’s Framesby and HTS Daniel Pienaar.