Sandcastle building will become an art form along the Eastern and Southern Cape coasts this holiday season as holiday makers pit their skills against each other. 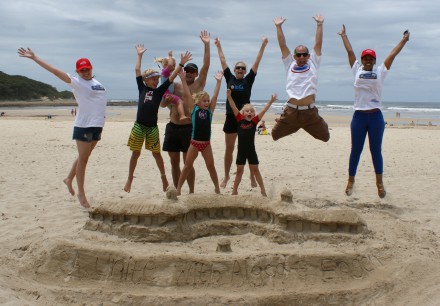 Prizes of fuel vouchers from Engen will be won by the winning sand castles as part of a holiday roadshow from East London to Mossel Bay.

There is also an opportunity to see the Engen Primax car up close in addition to the sand castle competition.

The hybrid car is a combination of a V6-powered sports car and runabout.

Entertainment is being provided by the Algoa FM Vibe mobile.

The roadshow will continue until 29 December, ending in Port Elizabeth.

“It’s all about fun in the sun with a total of R3 000 Engen fuel vouchers being given away daily,” says Toinette Koumpan, Marketing Manager of Algoa FM,

To be part of the summer fun beach goers need to collect their bucket and spade from the Algoa FM and Engen gazebo from Algoa FM’s presenter Drew Serfontein, build the most impressive sandcastle on the beach and then send their picture through to the presenter in studio.

“That’s a total of R36 000 in fuel vouchers that are up for grabs and all beach goers need to do is have some summer fun,” says Koumpan.

Engen and Algoa FM will be on the following beaches: at Jeffreys Bay Dolphins Beach on 18 December, on Plettenberg Main Beach on 19 December, Buffelsbaai Beach in Knysna on 20 December, Wilderness beach on 21 December, on the Diaz Beach in Mossel Bay from 22-24 December and at The Boardwalk opposite Hobie Beach on Marine Drive in Summerstrand, Port Elizabeth from 27-29 December.  In Port Elizabeth beachgoers will not be tasked to build a sand castle but rather have their photo taken with the Engen Primax vehicle and send it through to the Algoa FM studio.