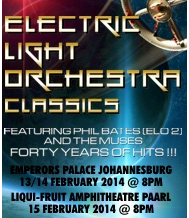 The Electric Light Orchestra featuring Phil Bates(ELO2) will bring four decades of Electric Light Orchestra hits to stage in Johannesburg and Cape Town.These concerts will also feature the popular South African electro string group, The Muses – the full sound  you know and love from the original classic recordings will be performed live. This is an incredibly rare opportunity for true fans of classic rock to hear one of the greatest bands of the 70’s, 80’s and 90’s live and revel in forty years of hits in one evening. The performances take place in February 2014 in Johannesburg and Cape Town.

The Electric Light Orchestra (ELO) are one of the most successful bands in the history of music. Their songs were played on the radio millions of times. ELO had dozens of top 20 hits; many of them became classics in pop history. The band forged a bridge between classical and rock music, between electronic and orchestral music, between traditional and modern trends.

Electric Light Orchestra Classics frontman Phil Bates (hailed by Classic Rock Magazine as among the UK’s best vocalists & lead vocalist and guitarist of ELO Part II in 1993) is the direct successor of Jeff Lynne in the ELO annals. Phil Bates and Electric Light Orchestra Classics will perform a set list that includes massive ELO hits ‘Don’t Bring Me Down’, ‘All Over The World’, ‘Shine A Little Love’, ‘Turn To Stone’, ‘Evil Woman’ and many more.

Tickets are from R240 and can be booked at Computicket.

The Electric Light Orchestra’s ambitious yet irresistible fusion of Beatlesque pop, classical arrangements, and futuristic iconography rocketed the group to massive commercial success throughout the 1970s. ELO was formed in Birmingham, England in the autumn of 1970, they sought to embellish their engagingly melodic rock with classical flourishes, Electric Light Orchestra Classic’s interpretation brings in to the twenty first century  a completely new light on the music of ELO and ELO Part II. Multi-faceted song structures and sophisticated instrumentation from the progressive rock beginnings of the band, as well as commercially successful mainstream compositions, fuse with classical music. A retrospective from the various ELO eras of the 1970’s, 1980’s and 1990’s will be presented at the concerts.

Phil Bates was born on 30th March 1953 in Tamworth, West Midlands, UK. His interest in music began while he was still at school. Under the omnipresent influence of The Beatles, he formed his first group The Wild Four in 1965 (later renamed The Teen Ballads). Phil played in various bands as a guitarist and vocalist, gradually encompassing the blues styles of great artists such as Eric Clapton and Peter Green. In the early Seventies, Phil recorded singles with a group and as a solo artist (first as Billy Bates and later under his own name) and toured with Duane Eddy, playing bass on his British tour before he went on to form Trickster in 1976. The band released two albums on Jet Records and enjoyed moderate single chart success in the UK and massive airplay in the United States. As stall mates of ELO, they went on tour with them as their support act on the legendary “Out Of The Blue” tour in 1978. Later they also toured Europe with Boston and John Miles and went on a British tour with Mik Kaminski’s band Violinski before splitting in 1980.

Before joining ELO Part II in 1993, Phil had various jobs: He worked as a session musician again (vocals and guitar), recorded and produced jingles for commercial radio stations and got a job as a recording engineer. As part of the band Atlantic he also recorded the album Power, which he co-wrote and sang lead vocals on. Furthermore he did extensive live work as a solo artist. It was during one of those gigs in the West Midlands that he met Kelly Groucutt which finally led to the offer to join ELO Part II. Phil was the lead guitarist, songwriter and joint lead vocalist for ELO Part II from 1993 through to 1999.

Gauteng based String quartet joins The Electric Light Orchestra Featuring Phil Bates for their South African Tour. Meet four drop-dead gorgeous, classically-trained virtuosos, all keen to get as many people on their feet and dancing the night away each time they unpack the contents of their two carefully considered albums. Their latest, Pop On Strings 2, welcomes back violinists Olivia Kotze and Mia Snyman, viola player Ruby Ngoasheng and welcomes in newest arrival and cellist Laetitia van Wyk. The quartet’s14 brand-new renditions of global smash-hit singles pick up where their debut left off. Only this time the wish list of songs came from the very people that help keep The Muses great. “We listened to what the fans wanted us to record, via our Face book and Twitter pages,” Kotze explains. “This album is all about taking the energy of what unravels when we perform live, and capturing as much of that as possible for fans to enjoy between seeing and hearing us perform live. The best part is we play a good mix of events, shows, and accept interesting invites to know just how to ignite the night.”

The Muses’ journey began in 2011, and in that time the four-piece have played the length and breadth of the country, invited by prestigious brands the likes of BMW, Mercedes-Benz, The Spring Summer Guess Fashion Show and the 2013 UEFA Champions League Heineken Mansion series.

Known for their quality productions, qualification as classically trained, pop prepped and able to deliver musicians, the music The Muses make generates enough energy to contribute to the national power grid and light a dance floor indefinitely. Whether it’s “Party Rock”, “Pata, Pata” or “Don’t You Worry Child”, their biggest floor fillers are soon to be topped by their new inclusions from the likes of David Guetta(“Titanium”), Bruno Mars(“Locked Out Of Heaven)and Pink(“Try”), amongst others.

The chemistry that makes The Muses spark comes from many different places. “Ruby is the rock chick and a big John Mayer fan”, Kotze explains. “Mia’s world revolves around music, she loves anything new and fresh on the market and with a busy teaching schedule there’s never a quiet moment in her life. Laetitia, or “baby-muse”, is busy studying music at the University of Pretoria, so there’s lots of classical influence in her life. I’m more of an indie and world-music lover, my all-time favourite artist is Cesária Évora.”

So what’s clear is their musical influences are varied, and some even a little less mainstream, but between the four music-makers each has their favourite. The best part being that they all get to show off their rich personalities at different times, thanks to the diversity of their respective and evolving playlists.

“We’ve all studied and learnt to master our instruments and the technical focus makes for some wonderful spontaneous moments,” Kotze continues,whether we’ve brought our laser show along for the ride or not. We love to get dressed up and have some good clean fun. Classical music may be our foundation, but we’ve left the launch pad, thanks to the success of our debut, and now Pop On Strings 2. Both are powerful calling cards we’re very proud of indeed.”Great music makes for a convincing introductions and licence to traverse the country, continent, and potentially the world, should fate become currency. “We love the buzz, the wonderful energy each show brings with it,” Kotze concludes. Big or small, blue chip or A-List corporates, The Muses make the rooms they play in, and with each the quartet blazes a trail and reputation that’ll see these four busy, playing up a storm indefinitely!