DURBAN (12 January 2014 ) – He might have brought his “holiday” swing to Durban, but it was still plenty good enough to hold up under immense pressure and carry South Africa’s Louis Oosthuizen to a thrilling victory in the Volvo Golf Champions at Durban Country Club on Sunday. 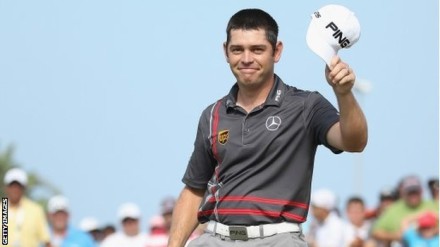 The defending champion held off a spirited challenge from compatriot and 2012 winner Branden Grace, who led the chasing pack, and produced two sensational birdies to finish with a flourish and claim his second Volvo title.

The 2010 Open champion posted a four-under-par 68 to set the target at 12-under-par 276 and finished a shot clear of Grace, who had birdied the 18th a few minutes earlier and whose 68 provided a glimmer of hope for a play-off decider.

But Oosthuizen was not to be denied, although he admitted that Grace’s presence up ahead was a huge motivating factor.

“I knew Branden was going to make a charge and I saw him up there early, and Thomas (Aiken) started off really well,” Oosthuizen said.

“Joost also played really well, just missed a few putts, but Branden was the one that really spurred me on to finish well.”

It was written in the stars, really, and if you are even slightly superstitious, the result would not have come as any surprise.

Not only has South Africans won all six European Tour events previously staged at the magnificent Durban layout, but for the last three years, Oosthuizen has won on his first European Tour start of each calendar year – the Africa Open in 2011 and 2012, and the Volvo Golf Champions last year.

The Mossel Bay pro was two shots behind third round leader Tommy Fleetwood from England at the start of the final round, while Grace – seven shots back after an opening 74 – had made up ground on the front runners and began the final round three off the pace.

While Fleetwood’s title chase in the blustery conditions went into a backward slide with bogeys at the fifth, seventh and ninth, Oosthuizen just motored along with seven consecutive pars and it was Grace who reeled in three birdies from the sixth to hit the front.

Fleetwood stemmed the bleeding with a birdie at the 10th and Oosthuizen dropped a shot at the 10th to give Grace some breathing room at the top.

Although the four-time European Tour champion dropped a shot at the 15th, he boxed a 35-footer for birdie at the 16th and holed another tester at the 18th to set the early target at 11 under.

Oosthuizen took a seven at the 16th in the first round and he was in trouble again at the par-four.

“I had another terrible tee shot and I was lucky I could chip out,” said Oosthuizen, who after battling his way back to the fairway for a second time.

“I nearly made a great par. I saw Branden made birdie on 18. I hit a two-iron off the tee and when I stood over the ball on 17, I knew that the second shot was crucial to give myself a good birdie opportunity.

“I hit a sandwedge from 119 meters to about 35-foot and made the putt. At 18, everyone thinks you just need to make a birdie, but around that green, it’s not easy.

“Luckily I was far enough where I could pitch it back into the grain and I could get it close.”