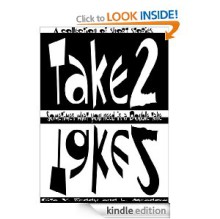 This is truly a unique writing collaboration  –  we met online in a book forum and decide to collaborate in writing a series of short stories based on a photograph from our own unique cultural perspective. I am South African, living in Jeffrey’s Bay and Gita V. Reddy is in Mombai India (isn’t the internet great!). Proceeds from the book will support charity. We chose  http://smilefoundationindia.org because of the work they do supporting woman and children in need.

The book is available on Amazon here

Once upon a time, just recently, two strangers met in a corner of the internet. They looked each other’s stories over and pleased with what they saw, they came up with a special task – Can two strangers who just met, come together and collaborate? Can they write a collection of stories, that reflect their own culture, in a thousand words or less in just two weeks? The parameters were set, the photos were chosen, the challenge was on, and after a mad burst of creativity twenty stories were ready for all to see.

“Take 2’ is a series of unrelated scenes, snapshots if you like, a series of random images that each author has given their own cultural interpretation too, their own ‘Take’ so to say, one Indian and one South African and yet the universality of human emotion and expression ties the stories together, because the things that unite us as human beings, are stronger than the cultural differences that separate us. Take 2 is more than a book. It is a shared experience and a belief that the common denominator between two people is their humanity.

The authors made a mutual decision to support charity with the proceeds from the book, choosing http://smilefoundationindia.org as the recipient because of the work they do meeting the basic needs of women and children in India, ensuring their future and fostering dignity and respect through education. We are all human, living on one planet and its up to us to look after each other.

To tease, to entice, to spark your interest, here is the essence of the book, just a bit, just a taste, not too much, but just enough to whet the appetite:

It was late in the night when Neeraj returned to his hotel suite and to a dozen urgent messages.

Baba was no more.

Neeraj set a flurry of activity in motion to reach Bangalore at the earliest. Four hours later, when he was at the Toronto airport, it suddenly hit him it was too late for him to pay his last respects. The first message was over ten days old. The hotel had not known how to contact him on the isolated island he was staying on.

He was on the island for a working holiday. Being a much sought after artist, he painted only the super rich, often in their mansions and resorts and secluded islands.

Scene 1 Take 2: Memories Are Made Of These
L. Meadow

Some memories are like a treasured painting on display for all to see. They are brought out at every opportunity and shared with everyone who will listen and thus kept alive. Some memories, however, get lost along the way, some deliberately and others through a sort of benign neglect.

Like many South African families, we went to the sea in December. We traveled down to Durban by car on the day after Christmas. The long hot road unwinding before us, down through the flat red lands of the Free State, down through the long rolling green hills of KwaZulu-Natal (or just Natal as it was then, appropriately named for Christmas), down, down, down until at last the sea appeared before us as a long blue strip on the horizon that slowly resolved into the waves and sandy beaches until, finally, we would pull up outside the bungalows at Margate. We would ignore our parents’ commands to help them unpack the car and my brother and I would race down to the beach trying to be the first one to put foot in the ocean before our irate parents dragged us back to unpack the car and settle in to our temporary home for the next two blissful weeks.