Algoa FM’s staff and board of directors are celebrating their Managing Director’s 25th year anniversary with the station this month. Dave Tiltmann is a true radio legend; serving as the MD of Algoa FM, a leading commercial and regional radio station broadcasting in both the Eastern and Southern Cape. 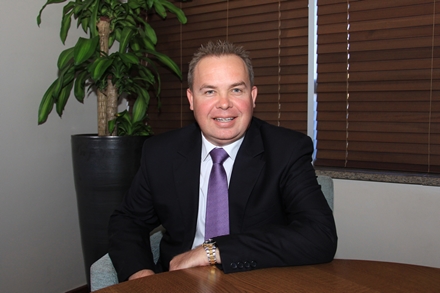 “I lead my business as a movie director rather than a managing director.  If you can weave fun and creativity through all serious business decisions, then fun becomes the business and leads the way to financial prosperity,” says Tiltmann.

He has served as the Managing Director for 14 years and is described by the station’s Financial Director Kevin Reed as “a leader that has vision, foresight, fairness, a sense of humour and creativity, wrapped up in a package of immense professionalism; he is certainly one to be followed”.

He started his professional career with the station on 3 January 1989.

He quickly moved through the different departments at the station, successfully fulfilling the roles of the Music Manager, Programme Manager and then being appointed as the Manager of the station, then still known as ‘Radio Algoa’.  He worked tediously to make Algoa FM a 24 hour station and on 1 January 1994, he realised this ideal through persistent efforts.

In October 1996 SABC sold Algoa FM to Umoya Communications and this was the point where the advent of real, commercial radio began.  He was then appointed the new Operations Manager.  The station’s first independent broadcast was on 1 April 1997 and in 1999 he was appointed as General Manager of the station with his Directorship following one year later.

“Under Dave’s leadership, Algoa FM has been instrumental in growing many local businesses into household names through best practice advertising initiatives. Dave sets very high standards in business, and he has worked tirelessly together with our advertising team and international media consultants in bringing top class products and innovation to market. He has excellent business acumen coupled with a positive empowering attitude, and is someone I believe who enjoys seeing people and businesses grow and succeed,” says Sales Manager of Algoa FM, Dennis Karantges.

The station also enjoyed nationally acclaimed awards including 2 MTN Radio Awards in 2013; Daron Mann won Best Breakfast Presenter in Commercial Radio and Wayne Hart won the award for Best Music Show in Commercial Radio for the Algoa FM Top 30.  Daron Mann says, “It’s been a long road since Xanadu, Radio Uppie and recording vinyl in real time on Sunday afternoons! I’d like to thank Dave for introducing me to radio and congrats on 25 years of achievement in the industry”.

Research has shown that the station’s news, second to its music; is the main reason that listeners tune into Algoa FM.  For this reason it was not much of a surprise when Neil Bisseker won 2013 Telkom Business Golf Journalist of the Year Award.

Tiltmann aspired and worked tirelessly for 10 years to gain a signal transmission footprint in the Garden Route.  He realised this ideal in December 2011 with the switch-on of the George-based transmitter.  Now 3 years later Algoa FM is heard and enjoyed in the beautiful Garden Route reaching Knysna, George and Mosselbay.

He has led Algoa FM to be among the leaders in the South African radio industry in the adoption of social media and internet platforms. Algoa FM’s New Media department has grown the station’s social media platforms exponentially over the past five years.  Social media is now integrated into all broadcast and advertising operations within Algoa FM. The station is also involved in print, and publishes Sport Elizabeth, a monthly newspaper.

Marketing Manager of Algoa FM, Toinette Koumpan says, “Dave is probably one of the most humble people you would ever meet who can engage with anyone from any walk of life.  I have been working under his wing for more than 5 years and upon first meeting him I never imagined that such a down-to-earth, funny and friendly man could be the leader of a leading media brand”.

Algoa FM has grown to become one of the leading media houses in the Eastern Cape; with a combined permanent and contract staff of around 60.

“I think the secret to Dave’s leadership is his genuine concern for people; whether that is staff or listeners.  He is a key supporter of developing staff through training and giving back to the community through numerous station initiatives that he has personally driven and supported; such as the annual Winter Woolly Week Drive, the Algoa Cares Golf Day,  pledge line and the SANBS Blood Drives,” says Celeste Thomas, HR Manager at Algoa FM.

“Dave is the spirit and backbone of Algoa FM. He humbly and silently achieves greatness and is never boastful. Over the past 24 years, I have personally experienced his hard work, dedication and excellence as an industry leader and he is truly deserving of our acknowledgement.  Anyone who has had the opportunity to work either with or under his wing will acknowledge that it is a privilege.” says Operations Director of Algoa FM, Alfie Jay.