De Krans Wine Cellar in Calitzdorp has, for the third consecutive year, been selected as the official wine supplier to the 20th annual ABSA Klein Karoo Nasionale Kunstefees (KKNK), which takes place from 29 March to 5 April in Oudtshoorn.  De Krans’ exclusive range of wines will be available at all the official festival ‘watering’ holes, which will include the River District at the kykNet Music Stage, as well as the ABSA Civic Centre, Club Al Capone, CP Nel Museum, the Oudtshoorn Sports Grounds, The Colony, Southern Cape College and the ATKV Neelsie.

The news was met with great excitement by the entire De Krans team as not only does the festival take place in the heart of the Klein Karoo but it is also the birthplace of these wines. This year visitors can once again look forward to purchasing the De Krans and Garden Route range of quality wines at affordable prices to enjoy at the festival, assuring visitors of the quality and versatility of these wines. The popular Garden Route Sauvignon Blanc, De Krans Chenin Blanc and Moscato perlé wines will also be available at the designated pubs, including the well known wines and ports.

De Krans is one of the oldest wine farms in the Klein Karoo, and a five time winner of the prestigious Champion Wine Cellar at the Southern Cape Bottled Wine Show. Last year De Krans was also awarded the Red Wine Champion Trophy at the Klein Karoo Young Wine Show. De Krans produces a wide spectrum of wines, ranging from excellent value for money wines to exceptional quality wines and ports, which over the years have been awarded sought after accolades, including Veritas and Michelangelo gold and double gold medals, respectively, Best Value Awards as well as 5-star ratings in the authoritative and internationally recognized Platter’s South African Wine Guide (for the ninth consecutive year). The Garden Route range of wines, also produced at De Krans, are sourced from cool climate grapes originating from the Waboomskraal area in the Outeniqua Mountains also situated in the Little Karoo.

De Krans winemaker Louis van der Riet will also be hosting daily tastings at 11am, from 1 to 5 April at De Krans, whereby he will be showcasing the different styles of port as well as a demonstration of six port cocktails, unique to De Krans. The demonstration, aptly titled Karoo Koktyls includes a fun overview of port, from traditional to “funky”. It is the first demonstration of its kind at the festival in the Port Capital, Calitzdorp – just 30 minutes drive from Oudtshoorn!

For more information contact Helet Viljoen or Bessie Swanepoel on 044 213 3314 or email dekrans@mweb.co.za. 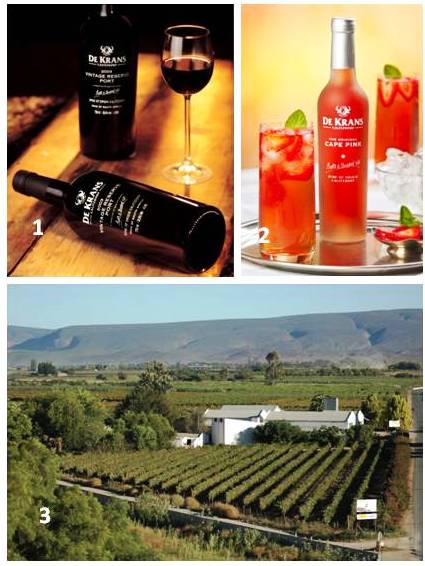