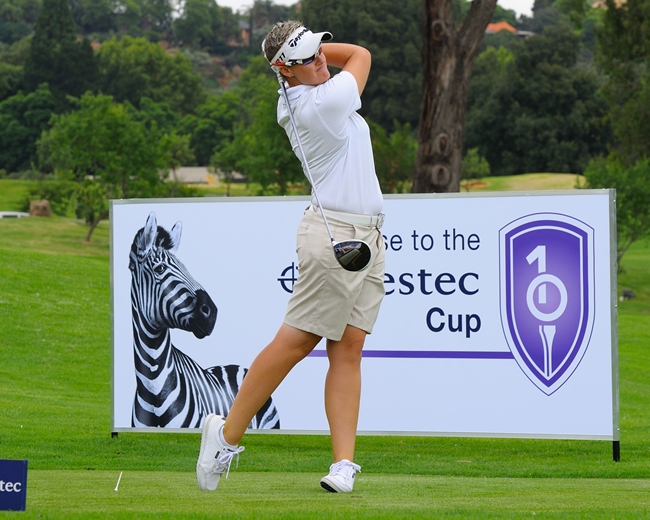 GEORGE, 23 February 2014 – South Africa’s Monique Smit won a lot of golf tournaments in a storied amateur career. And now she is a winner on the new Sunshine Ladies Tour. 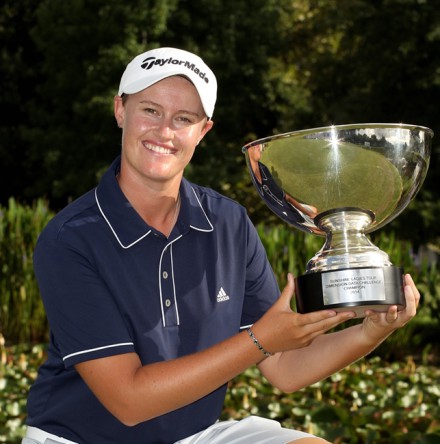 Smit followed an opening 63 at Oubaai Golf Club with an even-par 72 at the Outeniqua course to triumph with a winning total of nine-under-par 135.

Smit finished two strokes clear of Simon, who closed with a 73, and three ahead of France’s Anne-Lise Cauda, who notched five birdies against a solitary bogey for a four under 68. Eight-time Ladies European Tour winner Lee-Anne Pace carded a 71 for a share of fourth on five under 139 with LET rookie Nobuhle Dlamini, who carded a 67 for the low round of the day.

Smit not only broke her duck in the Sunshine Ladies Tour’s third event, but also vaulted to the top spot on the Order of Merit with the R24,510 first prize cheque.

The new leader in the race to the Investec Cup for Ladies was thrilled with her result.

“I am absolutely thrilled to get that monkey off my back,” said an emotional Smit, “To win here at home, in front of the local supporters, and to have my mom (Rejeanne) on the bag for my first win has made this victory so memorable.

“It was fantastic to play against idols like Ashleigh, Anne-Lise and Lee-Anne and to win. I’ve dreamt of this for a long time.”

Smit opened with three pars at the Gary Player-designed layout before dropping her first shot at the fourth. She made up for the loss with a birdie at the par-four fifth and reeled in two more birdies at the seventh and eighth holes. However, after turning in two under, a birdie at the 10th signalled the end of her gains.

Smit erased her three shot advantage with bogeys at the 11th, 12th and 14th holes. “To be honest, I think my nerves got the better of me over the first five hole down the home stretch,” Smit said.

“I hit a solid three-wood at the 11th, but I didn’t clear the bunker and dropped a shot. At the 12th I hit a good six-iron, but it was one club too little and I ended with a very long three-putt for bogey.

“I hit a great drive at the 14th but the ball rolled into the rough. The grass is so thick, my nine-iron came out right and I was left with an impossible chip. That’s when I told myself to breath, play the ball from the tee to the middle of the green shots and get the job done.”

Simon began the final round one shot adrift. The 24-year-old birdied the second and tied Smit for the lead through four hole. However, she dropped shots at the ninth, 12th and 15th, before holing out for a birdie at the last to secure a runner-up finish

Pace may not have secured the title, but the former LET number one did claim the Betterball Competition with her amateur partner, Ladina King

The pair combined for rounds of 60 and 64 to finish on 124, seven ahead of Simon and Smit, who both posted 131s with their respective amateur partners Sandy Hird and Popo Molefe.

Herewith the final result from the Sunshine Ladies Tour’s Dimension Data Ladies Pro-Am, played at the par-72 Outeniqua course at Fancourt in George on Sunday, 23 February 2014; all competitors RSA unless otherwise specified and amateurs indicated as (AMA):