The Chevrolet Warriors will soon be setting Oudtshoorn alight with some explosive and action-packed T20 cricketing action in the upcoming District Day hosted by South Western Districts Cricket and CP Nel.

This event has become quite an event in the sporting calendars around the Eastern Cape and surrounding districts. Last year the boys conquered Queenstown, and now they’re bringing the action to the Western Cape as they travel to Oudtshoorn for a day of pure cricket indulgence.

The day will start with scores of excited young scholars making their way to the Recreational Grounds to have an opportunity to partake in coaching clinics with the Warriors. The coaching clinics will see the scholars have one-on-one time with the players learning some vital skills from the game. After a day of learning and skills development, a select few scholars will have a once in a lifetime opportunity to be selected to play in an exciting T20 encounter with some of the Warriors, as well as some lucky members of the public. All this action will take place at the Oudtshoorn Recreational Grounds starting at 15h30 on the 26th February.

Entrance to the grounds are free, so bring your friends and family down to what is sure to be an exciting – and at times funny – short format game.

The local Chevrolet dealership, CP Nel will also have a mobile dealership set up at the event with some beautiful Chevrolet’s for you to ogle at and even arrange a test drive.

Diarise the 26th February and get down to the Recreation Grounds at Oudtshoorn for all the fun and entertainment. 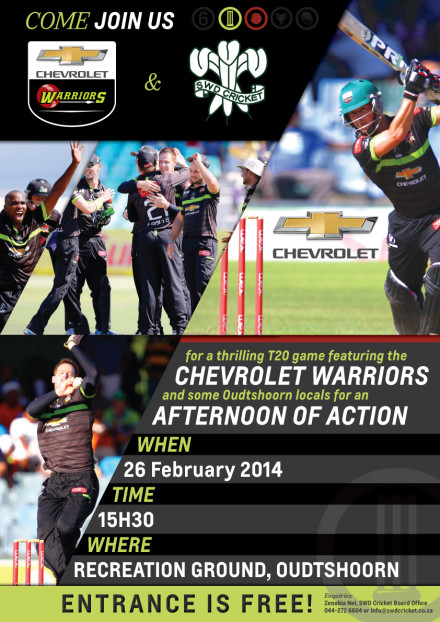