A whopping R23.5 million was raised nationally last year by Casual Day, the fundraising project that has seen the South African public open its hearts to persons with disabilities for almost two decades. Casual Day celebrates its 20th anniversary year in 2014 and will be pulling out all the stops with its Bring out the Bling theme, which was announced at the project’s annual awards ceremony in Stellenbosch.

The organisations that raised the most donations in the Western Cape are: Paarl School in Brackenfell with R175 460, Filia School in Goodwood with R134 106, Cher’e Botha School in Belville with R113 384, Sunfield Wellington with R100 000 and Western Cape APD in Milnerton with R83 940.

Casual Day is the flagship project of the National Council for Persons with Physical Disabilities in South Africa (NCPPDSA), which this year celebrates 75 years of service to the community of persons with disabilities. Over past two decades Casual Day has helped the NCPPDSA fulfill its mandate of creating a barrier-free, fully accessible and inclusive society for all, raising almost R195 million.

Le Roux was there to provide inspiration at the annual Casual Day event, billed as “Breakfast With The Stars”. Long-time Casual Day ambassador and award-winning star of stage and screen, Terence Bridgett, was the Master of Ceremonies. He said had been involved with Casual Day for two decades and that “Casual Day is not just a commitment for a year or two; it is not just a commitment for a decade or two. I suspect it is a lifetime commitment.” Attendees were delighted by his performance of a song to the soundtrack of ‘Diamonds Are Forever’ which rounded off the events. He wrote his own lyrics and called the song ‘Casual Day Is Forever’.

Casual Day Chairman and Executive Committee member of the National Council for Persons with Physical Disabilities in South Africa Mac Mia gave some background history of the project, explaining that, “Casual Day was not built by one individual, it is a collective effort of which we can all be proud. Casual Day was built, one sticker at a time, by everyone who participated over the last 19 years.

He continued, “2013 saw many positive changes – and we can already see and feel the effects.  Very importantly, we have ensured that the project remains in good hands and continues to serve its stakeholders in a sustainable and transparent way. The changes we have implemented are the first of a series of transformational ideas to create efficiencies and to better communicate with you, our most valuable partners. Casual Day was built, one sticker at a time, by everyone who participated over the last 19 years.

“The competition in this space has become crowded with social agencies and fundraisers, each with a strong purpose and all chasing the same pots of gold. If we are to remain relevant and successful we need to strengthen the Casual Day brand and we need to target our audience as a trustworthy, transparent, accountable and focused campaign.”

The theme for 2014 was announced – Bring out the Bling. Project leader Celeste Vinassa said afterwards, “To celebrate Casual Day’s 20th birthday we are inspiring South Africans to dress UP, not down. The theme is Bring out the Bling and the colour for the year is Dazzle Blue, a dramatic colour relating to the world of the theatre. So our message to you is to rustle up a little razzle dazzle. Casual Day is all about fantasy and dressing up in things you can find around the house. Be creative with glitter, fabric, shiny paper, sequins or just wear your sticker and a posh casual attitude!”

Principal financial sponsor Edcon, was represented by Mercia Maserumule, the Edcon Group CSI Manager, Transformation and Corporate Affairs. She said that “Edcon understands that full inclusion and integration is important and that able-bodied people need education on issues of disability – so that they have information and are sensitised. The Casual Day project is one of the ways that Edcon can support the mandate of the NCPPDSA, which is to serve the needs of persons with disabilities. We want our staff and customers to be included in this education.”

For more information on how to participate in Casual Day go to www.casualday.co.za 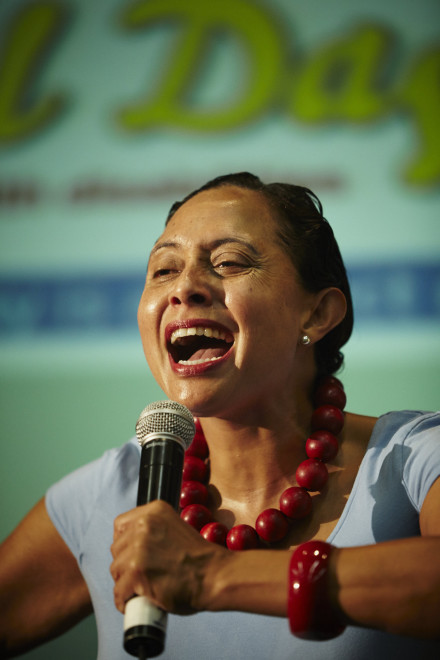