What do you think of the new kit?

At the verge of the start of the new rugby season against the Free State in Bloemfontein this coming weekend the SWD Rugby Union was proud to announce a major new sponsorship deal with Canterbury and showcased their new Vodacom Cup kit to mainstream media on Tuesday morning at Outeniqua Park. 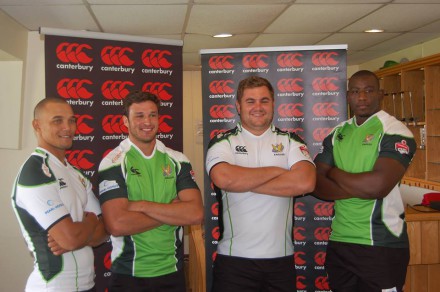 The deal that will run consecutively over the next three years will see the Eagles partnering with Canterbury which is generally regarded as the biggest rugby brand in the world. The partnership sees Canterbury investing in the positive momentum generated by SWD Eagles Rugby over the last three years moving from 7’th in 2011 to a semi final position in 2013 on the Absa Currie Cup 1st Division Log. This positive momentum is confirmed by the largest amount of sponsors and advertisers in the Union’s history and the biggest supporter attendance over the last three years during 2013.

“Established in 1906 in New Zealand Canterbury was the world’s first rugby brand and today is world renowned for its quality garments and apparel. We sponsored the Springboks for eight years and will be sponsoring Rugby World Cup hosts England in 2015 together with a variety of other teams that are strategically selected. We also sponsor the Lions in Super Rugby and Currie Cup Premier Division and now the Eagles in the First Division backing the underdogs that we think can surprise many” said Du Toit Botes, General Manager of Canterbury holding company, Superbrands. “We are looking forward to a long and prosperous relationship with SWD Rugby”

Johan Prinsloo, CEO of SWD Rugby explained that he dealt with Canterbury when he was CEO of SA Rugby and that the professional nature of the brand can only benefit SWD Rugby “Canterbury’s reputation is unprecedented and the new association will see our professional and amateur teams kitted out in world class apparel. As you can see with our new Vodacom cup kit it is a cut above what SWD had before and the jerseys are not only designed well but feature new cutting edge lightweight moisture management material that will benefit our teams”

Canterbury will also be available to some clubs and schools in the region and aims to use their association with SWD Rugby to build their footprint in the Southern Cape. All the teams playing in the finals of the CELL C Community Cup over Easter in George will also be wearing Canterbury clothing.