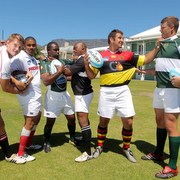 Six clubs, including first-timers Hamiltons and Kempston Old Selbornians, have booked their places in next month’s Cell C Community Cup Easter play-offs after a penultimate round of pool action that saw numerous title contenders pull away from the chasing pack.

From Pool A, defending champions Gap Management Despatch will be joined in the last eight by Old Selbornians, who needed a last-gasp breakout try from wing Bradley Birkholtz to eliminate Mossel Bay Barbarians 30-20 in front of 2 700 fans at D’Almeida Stadium.

Last year’s runners-up, Jonsson College Rovers, ensured they would finish top of Pool B after a hard-fought 41-20 win over fellow qualifiers Roodepoort, with former Springbok wing Jongi Nokwe re-emerging from an injury layoff with two tries.

And in Pool D, qualifiers Hamiltons and Impala will fight it out for top spot in Rustenburg this weekend after big wins over Shumba Ferros and Wesbank respectively.

But all eyes will be on Pool C on Saturday as Roses United, Refreshhh! Centurion and G5 Metals Brakpan slug it out for the last two places on offer. Unbeaten Roses hold a one-point lead over their rivals and are in pole position to qualify for George, where SARU’s national championship for non-university clubs reaches its climax over the Easter long weekend, from 17-21 April.

Roses however will need to beat bottom-placed BB Truck Noordelikes to not only be assured of their place but also to finish top. Adding spice to the permutations is that Centurion, who were impressive in their 58-20 victory over Kaufela Boksburg, will be at home against Brakpan – last year’s bronze medallists and one of the pre-tournament favourites.

And while the identity of the qualifiers from the other three pools is known, the make-up of the quarterfinals is still unclear as it is only College Rovers who are assured of finishing top. Despatch will travel to East London to face Old Selbornians on Saturday, with the loser set to face Rovers in the last eight, while there will be equally high stakes in the Hamiltons vs Impala showdown.