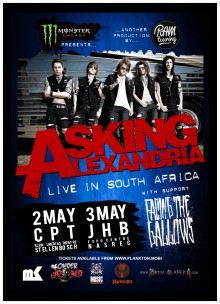 ASKING ALEXANDRIA in South Africa: May 2014

The UK is very well known for breaking some of rock’s most influential acts and as of 2011 you can add ASKING ALEXANDRIA’s name to this already illustrious list. In Sept. 2009, this British sensation unleashed their debut album, Stand Up and Scream and the album quickly sent shockwaves throughout the metal/hard rock underground scene. This was a propulsive blend of aggressive music with hints of European Trance, soft catchy melodies resulting in a sound more mature than just your average play by numbers hardcore outfit. Their second album Reckless and Relentless, debuted at #9 on the Billboard Top 200 and won an Independent Music Award in 2012 for The Best Metal/Hardcore Album. Their latest album “From Death to Destiny” was released in August 2013.

“Since our formation, we have toured all over the world, released 3 studio albums album and made the most amazing friends and fans along the way. We have absolutely no intentions of slowing down.” says Ben Bruce, guitarist of ASKING ALEXANDRIA.

South Africa, are you ready to see one of the world`s most exciting, ground-breaking and heralded bands rock our shores? Ticket sales at Plankton.Mobi are open for once of shows in Cape Town and Johannesburg. The opening act in both cities is Facing the Gallows.

Facing the Gallows, one of SA`s most respected metal acts, released their debut EP in the form of a split album with friends The Dead Will Tell entitled, This Is Hate City, in 2012. The band has just released their much-anticipated latest offer, Chapters, which they will be touring around South Africa from November 2013 into 2014.

Johannesburg Venue: The Johannesburg Expo Centre (Hall 8) is situated just to the South-West of the city CBD on the Corner of Rand Show and Nasrec Roads, directly adjacent to the iconic “Soccer City” National Stadium.  The best approaches from the directions of Pretoria, Sandton, OR Tambo Airtport, and Boemfontien are all well detailed on the venues website here

Tickets are R350.00 available from: Plankton.Mobi.

RAMTouring would like to thank the following sponsors: Monster Energy, Jagermeister and Music Connection.