Cape Town music legends ‘The Blues Broers’ are launching a new album with a series of live shows across South Africa. 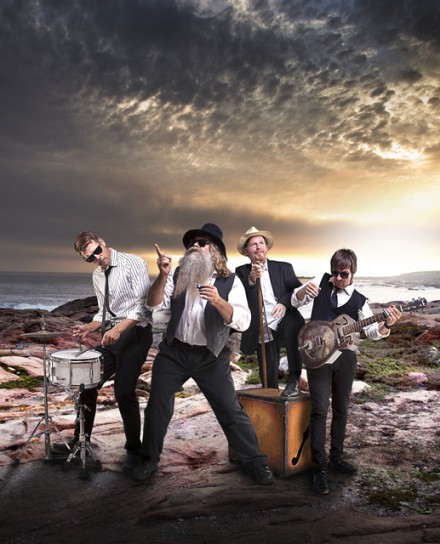 Into the Red (GR007) was recorded and mixed at Sunset Studios in Stellenbosch and consists of 14 new, original compositions. The band explores several blues styles on the album. ‘My Baby Left Me’ is a traditional acoustic blues performed on washboard, tea- chest bass and resonator guitar, while ‘My Black Dog’ has a ‘70s electric blues feel. ‘Fire and Brimstone’ is full of gospel inflections and ‘It’s getting worse’ trades laid back horns against a funky electric piano riff.

Moving beyond the boundaries of the blues ‘Let it Rain’ is a soulful ballad and ‘Caroline’s infectious West African guitar stylings push the band into new harmonic territory. There’s even a Christmas song! ‘Jungle Bells’ pairs a humorous lyric with a ghoema drumbeat and features the only kazoo solo you’re likely to hear on a South African release this year.

Into the Red is the seventh album from Guava Records, their own record label. It’s available from digital and retail stores, at live shows and through the band’s website.

Bass player Rob Nagel sums up the philosophy behind the recording process, “We were sitting around listening to some old Bo Diddley vinyls the other day, when one of us said that it sounded just like Bo was playing a gig in the studio. That got us thinking. How about we approach our next album like that?”

It’s hard to believe, but the Blues Broers have been performing together for twenty-five years.

In that time they’ve played at hundreds of venues across Southern Africa, from dimly lit bars to sunny outdoor amphitheatres. In 2014 the band has booked a series of shows to coincide with the launch of the album.

If you use the photographs accompanying this press release in your publication, please give credit to the photographer: Riehan Bakkes (www.bakkesimages.com)

The Blues Broers are:

Rob Nagel: vocals, bass, harmonica. Rob was a member of All Night Radio, a classic ‘power trio’ rock band that was based in Johannesburg. He also founded the ‘Smokehouse Blues Club’ in Cape Town in the 1990’s. In his spare time he collects and restores early pinball machines.

Albert Frost: vocals, guitars. In addition to a successful solo career, Albert has worked with Arno Carstens and Valiant Swart and is in the cast of the ‘Riders from the Storm’ show. He has built up a large collection of acoustic and electric guitars.

Simon Orange: vocals, keyboards, tea-chest bass. Originally from the U.K., Simon has done session work for many South African artists and he recently started writing music for theatre and video. He lists ‘wine appreciation’ amongst his hobbies.

Jonno Sweetman: drums, percussion, washboard. Jonno grew up in the Eastern Cape and is a prominent drummer on Cape Town’s jazz scene. A keen surfer, he spends as much of his time in the water as he can.