In his Presidential address on Friday evening during the SWD Annual Awards function the President, Rudy Claassen, admitted that the past season in many ways was a very challenging season but in reflecting on the achievements in the province SWD Cricket can be very proud on their achievements the past season. 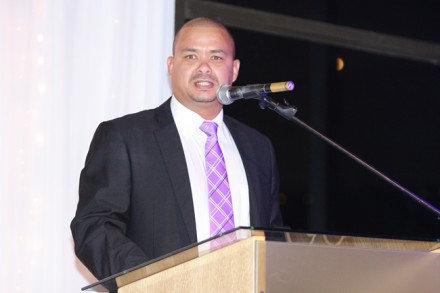 “Our biggest challenge since we became a full affiliate of CSA in February 2013 was to finalize our shareholder status within the Cricket Eastern Cape structure and our main focus will remain this issue.  We as leaders and management will direct all our energies in resolving this matter.  It is critical for the future of SWD Cricket specifically in terms of commercial value, hosting of high profile events, television coverage and the upgrading of our stadium”, he said.

According to Claassen club cricket will remain a key focus area of the Executive Committee.  The elevation in the grants paid to clubs over the years was evident with the increases as mentioned.  The grant to clubs in 2006 was R60,000 and in 2007 it was R143,000 whilst the expenditure to clubs increased from R265,000 in 2011/12 and in  2013/14 the amount – excluding capital projects was R426,000.  That includes investment in coaching programs, provision of pitch covers, cricket and training equipment, cricket balls for leagues, transport grants as well as maintenance projects.

An initiative that will continue is the Club Excellence program where clubs were awarded with financial incentives in reaching specific objectives in an outcome based funding program.  This program placed an emphasis in proper administrative and governance structures at clubs as well as the training and recruitment of officials such as umpires, scorers, coaches and ground staff. Fourteen clubs are part of the club development program this season.  This is an initiative that is funded by the Western Cape Department of Cultural Affairs and Sport.

The Board, in August 2013, mad the appointment of a High Performance Coach to fill the void in the high performance program.  The appointment of Mr Andre du Plessis proved to be a successful step – especially considering the improved performances of junior teams at National weeks – it is however very important that the province must maintain its top junior elite players and groomed them for the senior team.

The inclusion of Richard Maree in the SA Colts team is evident that our high performance program is on track.  Allow me to convey a special word of thanks to Chevrolet for their financial contribution towards this program.

CSA placed a huge emphasis on its transformation program with specific reference to the Black African Development program.  A high performance coach responsible for the development of elite Black African players will take office on 1 May 2014.

Claassen also eluded on the process whereby CSA is making progression to introduce an Operational Model for South African cricket Similar to most successfully run organisations, it is imperative that CSA implement an operational model that practically connects CSA’s strategies with its vision of making cricket a truly national sport of winners.  The model is intended to objectively guide CSA, its Affiliates, Associates, Franchises and Stadia on how to optimally apply/allocate its resources to deliver on its strategies whilst sustaining itself in the process.

The formulation of the model thus incorporated the following key factors;