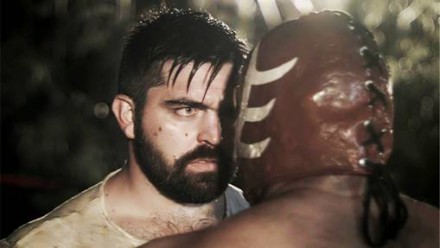 Steyn de Wet `s single “Maanligwandelaar” is currently s favourite with Steyn`s fans and was selected as one of kykNET`s music video projects for 2014.  The video is curently on high rotation on kykNET Musiek.

Link to the video here: https://www.youtube.com/watch?v=YIWnvok_bIk

Stephan Potgieter, MK and kykNET Musiek`s Content Executive says: “ Steyn is a new South African musician with fresh ideas and he is eager to make music. We really liked the concept and the song. Steyn is an artist to invest in for the future.”

“We all are perpetually at war with ourselves” says Steyn. “I think that this is why this song is so popular. Everyone can associate with it.”

Steyn walks through a dark forest. He seems to be alone until he stumbles upon a wrestling ring.  Steyn is surprised to find a huge masked wrestler in the ring.  Steyn gets into the ring and starts wrestling with the masked stranger.  Steyn gets thrown around a la WWE style and the fight culminates in a brutal beating.  It seems that Steyn is man down, but he manages to get back up on his feet, only to find an interesting turn of events when the indentity of the mysterious wrestler is revealed.

The video was shot in March in rainy conditions in Johannesburg. This resulted in various technical problems, but also added to the emotional complexity and mood of the story.

Steyn`s music and videos have generated mixed opinions.  He believes that one should say a thing like it is. “ There is nothing special in just swimming with the stream in any creative work. I enjoy working with the fine lines between humor and silliness, intimacy and exaggeration, irony and inconsistency.”

Steyn de Wet lives in Johannesburg with his architect wife Zelda. He works by day, makes music at night and is also studying a masters degree in Finance through the University of London.  The single “Maanligwandelaar” is from his debut album “Kyk Maar Mooi” that was released in 2013.