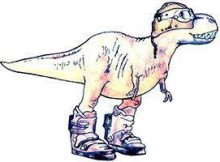 Uninspired by the lack of family-orientated TV shows that parents could actually enjoy with their children, experienced movie set creature sculptor and producers Jenni and Charles Martin of Rocketboot Rex decided to fill the gap the only way they knew how – making a better show. That led to the development of Alieons, a quirky, locally-produced sci-fi themed children’s programme that is designed to keep both parents and children entertained.

“Having a seven-year old boy ourselves, and from talking to other parents, we know that adults want their children to see positive and uplifting shows. A lot of what’s aimed at children today resorts to frenetic action, violence or aggressive attitudes, and often assumes and then reinforces a minuscule attention span,” Charles Martin explains. “We wanted to make something that children would find exciting and fun, but that also build them up. Alieons is made to inspire children to strive to be their best, to overcome challenges, to be solution orientated, to encourage them to have an interest in the sciences and to promote a respect for life and the nature around us. We’ve created both strong male and female characters, and then mixed in cool spaceships and robots and gadgets, wrapping it all up in a grand adventure story.”

The series features an array of pocket-sized alien characters that travel across the earth in the research ship The Copernicus, on a mission to explore the natural and man-made wonders of Earth. Through teamwork and courage, they overcome obstacles from space junk collisions and catching computer viruses, outrunning gaseous cows and escaping the clutches of a cat. (And they always get back to their ship in time for a lovely cup of tea.)

“Each episode is a blend of adventure story and learning by stealth – we’ve embedded real science facts that are integral to each plot, and from which children will glean without even realizing they’re learning,” says Martin. “These topics draw from a diverse range of fields, from physics and biology to animal and human geography.”

Sci-fi fans will appreciate the set, that was built entirely by hand. “What we’ve done is hark back to the sci-fi films that we loved when we were younger, such as the original Star Wars trilogy, and we chose to build physical sets and ships and characters. We then spend a lot of time making these as beautiful and detailed as possible. We were influenced by Art Deco and Art Nouveau in the designs, and we’re used real leather, hardwoods, hand cast metal components, and even real diamonds in their construction. We then shoot these elements and combine them with animation and special effects, in all creating a very unique look and feel on screen.”

The cast is made up from several local actors, as well as ones based in New York, London and Cardiff. The next step will be to obtain the last round of funding required, through the crowd-funding platform, Kickstarter. “Up until this point, we have financed the entire development of the project, and now we need the money to fund the talented cast and crew in actually make the show,” says Martin. “Instead of going through a network, we pitch the idea to the public, who then participate in funding the creation of the project. They in turn receive a reward for their contribution, which can range from an Alieons DVD to an executive producer credit.”

This was done, Martin explains, so as to maintain the vision of the show to be both kid- and parent-friendly. “What we are asking is for people to have a good look at Alieons, show their kids, their nieces and nephews some of the short videos and pictures on our website or Facebook, and see if they like it. We welcome any kind of feedback and of course – your support!”

Rocketboot Rex is a small studio based in Cape Town. We have four full-time staff all working on the Alieons project and we’ve also contracted a lot of other local talent to meet the specialized roles needed for a TV production, from the composing of the music, sound engineering to camera technicians.

Jennifer Martin is the actual creator of Alieons, and she has been a professional sculptor for over 20 years. She was also a creature’s sculptor on the first Harry Potter film and The Mummy Returns film.