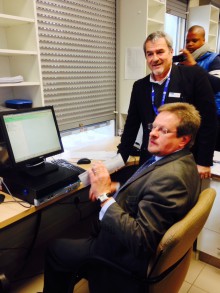 This morning Western Cape Minister of Health, Theuns Botha, hosted an event at Grassy Park CDC to demonstrate the province’s IT database with records for over 80% of patients in the Western Cape.

Prior to 2004 none of the primary healthcare facilities were computerized. There was a heavy burden on clinics with doctors seeing up to 100 patients a day, or more than 1000 patients at some facilities. Registries were chaotic with up to four filing systems per site.

In the past 10 years the province’s Primary Health Care Information System was developed starting with an obstetrics system (CRADLE) that had been developed in-house for maternity units. The next development came with the decision to adapt this for use in all primary healthcare facilities and the roll-out started in 2006. A dedicated project team works on the roll-out of the system.

Since the start of the project, PHCIS has been implemented at 176 facilities. In the next year the current phase of the project is expected to be extended into another 22 facilities and it is envisaged that by 2015 all Western Cape Government clinics will operate with this system. By the end of 2016 satellite health facilities will be integrated into PHCIS by means of a “hub and spoke approach”.

The Primary Health Care Information System (PHCIS) is the most widely used patient-based system in South Africa and on the continent. The patient master index has records for over 80% of patients in the Western Cape. Patient information can be shared across clinics irrespective of where they are located.

Minister Botha says: “For patients the PHCIS offers an improved pathway of care in line with our Healthcare 2030 strategy. The system will offer patients respect and dignity because the system recognises them. They will have individual appointments will allow them to plan their own time better. In the long term patients will have shorter waiting times.”

For the clinicians their working environment will be generally less stressed with a more predictable workload. Clinicians will be able to deliver a better quality of care because they have better information about their patients.

The HIV/AIDS and TB treatment module is now the mandatory electronic medical record system for use at public healthcare treatment facilities in South Africa. The system has been demonstrated to Health Ministries from several other African countries with very positive responses.

The project has made massive strides in creating and maintaining electronic health records for all patients in the province. The success of the development and implementation is largely based on an incremental and agile approach, working in close consultation with the user community.

PHCIS was built “by the people, for the people”, and is robust, sustainable and scalable to country level. The development team had a close relationship with the user community, and this reduced the “design reality gap”, making the system closely adapted to unique requirements and work processes.

Future growth of the system includes an appointment system at all clinics, chronic disease management, electronic reporting, an interface with Home Affairs and waiting time surveys.

These developments and the constant drive towards excellence has seen the Primary Health Care System win the 2012 International IT Networking Award, the 2010 Africa ICT achievers award for best ICT Project in Africa and in 2008 the Premier’s Silver Award for Service Excellence, and its accomplishments published in two health magazines which are distributed globally.