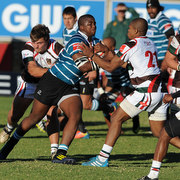 GWK Griquas, the Leopards and the Down Touch Griffons registered strong starts to the Absa Currie Cup Premier Division qualifiers this weekend to stamp their authority early on in the battle for the remaining spot in the Premier Division.

GWK Griquas smashed the Border Bulldogs 52-5 at GWK Park in Kimberley for the biggest win in the opening round, while the Leopards thumped the SWD Eagles 51-23 at Profert Olën Park in Potchefstroom and the Down Touch Griffons pipped the Boland Cavaliers 27-25 in the North West Stadium in Welkom for a full house of home wins.

The Valke, meanwhile, had a bye.

GWK Griquas were emphatic in their performance, with their attack and defence proving to be too good for the Border Bulldogs.

In total Griquas scored an impressive eight tries, the first of which was in the second minute of the match, while they had already secured their bonus point try for four tries by half time.

Despite being 28-0 up at the break, the hosts continued to dominate proceedings, as they succeeded in scoring another four second-half tries, while with their solid defensive structure halted any momentum Border tried to build up on attack.

In the end, the visitors managed to cross the tryline only once for their five points.

The Leopards, meanwhile, overcame a strong first-half fight by the SWD Eagles for their 51-23 victory, in which they scored seven tries to only two by the visitors.

The first half was tight as both teams used their point-scoring chances well, which saw the Eagles trail only 21-16 at the break.

But the Leopards stepped up their performance in the second half, which earned them four tries in the half and allowed them to play the visitors out the match.

Leopards skipper and former Springbok flyhalf, Andre Pretorius, led by example as he dictated play well and kept the scoreboard ticking with his accurate boot.

In Welkom, a superior kicking display allowed the Down Touch Griffons to register a 27-25 victory against the Boland Cavaliers, despite the hosts being outscored three tries to two by the Wellington side.

In fact it was a last-minute penalty by fly half Franna du Toit that sealed that the victory for the hosts following a competitive performance throughout the match by the Cavaliers.

Such was the closeness of the clash the Down Touch Griffons led 14-13 at the break, while the team had to fight until the final whistle to emerge victorious.