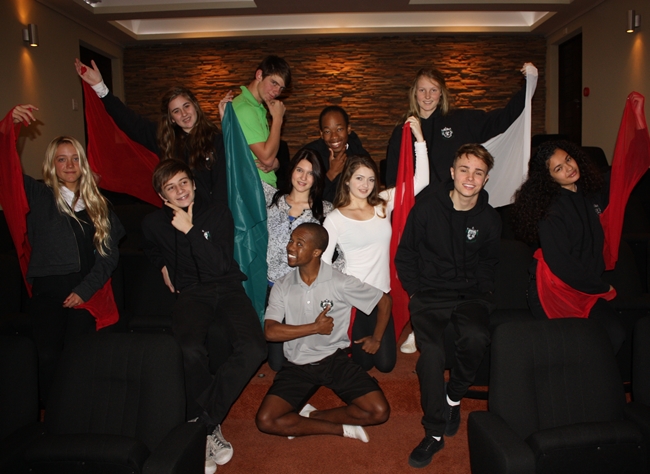 The new Performing Arts Academy at KeNako Academy is really taking shape and making an impact.  Enquiries have been received from interested parties in George and all around South Africa.  The new Performing Arts Academy will be hosting male and female students both for the School Going Program and for Tertiary Education students who will be enrolling for the 4 year Trinity College London Diploma when the academy officially commences operations in January 2015.

The academy’s Performing Arts Campus is another exciting development.  It is a property in Montagu Street near the Fancourt main entrance and the original building is a Heritage house with artistic elements, so this venue will surely further inspire students in the Performing Arts.  Plans have already been drawn and approved to extend the current facility and it will accommodate all of the different disciplines that make up the performing arts – Dancing, Singing, Drama, Acting and Musical Instruments.  School going students from out-of-town will board at the superb KeNako Academy hostel facility, whilst Tertiary Education students will board with the KeNako School Leavers in separate accommodation.

The professionals from the different disciplines involved in this exciting new venture are all very excited.  Ria Vorster, Head of the new KeNako Performing Arts Academy, is already working with several students in George.  Drama was introduced as an Art subject option within the Cambridge International Education curriculum at Rundle College and many students are already participating in this program.  The beauty of the opportunity for Rundle College students is that they will gain a Drama qualification from Cambridge International Education and they can also commence studies on their Trinity College London diploma.  All school going students who participate in the Performing Arts Academy will benefit by studying a course that is usually only available at Tertiary Institutions.  On completion of their course they will receive their Trinity College London diploma at an earlier age than normal.  The afternoon academy option is not only limited to Rundle College students.

KeNako’s Performing Arts Academy will be holding auditions on Saturday 28th June at the Banquet Hall of the Far Hills Hotel.  Students who are accepted will be enrolling for an international 4-year course in Musical Theatre accredited by Trinity College London.  The course officially commences in January 2015.  The selection of subjects is broad and caters for a variety of artistic forms.

Students interested in auditioning are still welcome to enter but they do need to pre-book since they will need to prepare for the audition.  A student does not necessarily have to have had previous training or experience.  All they need to be is at least 15 years old and to have a passion for their discipline – anything is possible!  Interested parties can call Ria Vorster at 083 459 4189 or contact the KeNako Academy on 044 874 0370. 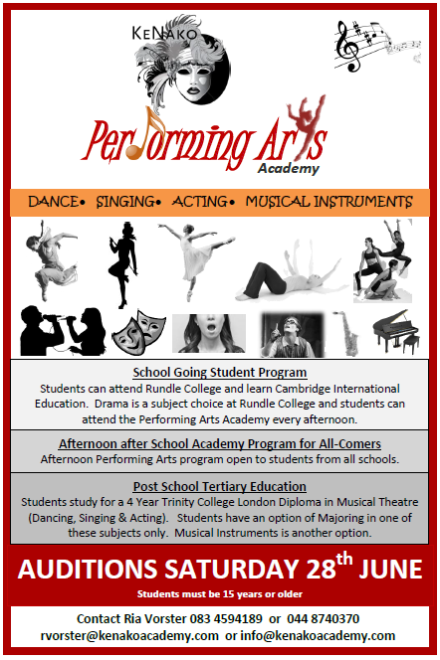