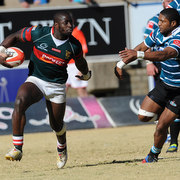 GWK Griquas remain the only unbeaten team in the Absa Currie Cup Premier Division qualifying rounds, while the Valke registered their first victory this weekend in an exciting third round.

In the weekend’s matches GWK Griquas survived a strong second-half fight back from the Leopards at GWK Park in Kimberley to secure a narrow 33-32 win, the Valke created an upset in George by thumping the SWD Eagles 52-34 and the Boland Cavaliers registered a convincing 37-12 victory against the Border Bulldogs at the BCM Stadium in East London.

GWK Griquas’ failure to secure a bonus point, while the Leopards earned two bonus points for scoring four tries and losing within seven points, means that the Kimberley side only boast a two-point lead over the Potchefstroom team on the log table with three matches remaining in the race for the last available spot in the Absa Currie Cup Premier Division.

GWK Griquas started their clash against the Leopards with a bang in Kimberley and scored all three of their tries in a strong first-half showing.

Right wing Nico Scheepers kicked his first penalty in the sixth minute and crossed the tryline four minutes later to hand his team an 8-0 lead.

Looseforwards Marnus Schoeman and Burger Schoeman pushed the team into an encouraging lead in the second quarter as they crashed over the tryline, while Scheepers kept the scoreboard ticking with his accurate boot.

In return Leopards managed to score one try by flank Juan Language and a penalty by centre Adriaan Engelbrecht, which left them trailing 27-11 at the break.

The Leopards, however, bounced back with intent in the second half and scored three tries, while limiting GWK Griquas to two penalties. However, this determined effort was not enough to secure a victory and the team had to settle for a disappointing 33-32 defeat.

The clash in George between the SWD Eagles and Valke proved to be a try festival, with the teams crossing the chalk 12 times between them. The Valke were in fine form despite the clash marking only their second in the competition, although the SWD Eagles had the first say with dangerous wing Alshaun Bock scoring the first try in the sixth minute.

But the Valke cancelled out this lead minutes later as they scored three tries in 14 minutes to force their way onto the front foot. The hosts replied with a try by wing Anver Venter to trail 25-15 at half time.

This bolstered SWD’s confidence and they hit back after the break with two quick tries and another minutes before the final whistle, but again the Valke showed their firepower and took control of the match as they scored four second-half tries to secure their first victory in the competition.

The clash in East London was largely one-sided as the Boland Cavaliers dominated against the Border Bulldogs from the outset for their first bonus-point victory in the series. Such was their dominance they had secured their bonus point for four tries by half time.

Three of these tries were scored in the first 23 minutes.

They continued to dominate in the second half despite Border putting up a brave fight on defence, and increased their try tally to six. Border, meanwhile, battled their way to two tries, one of which was in the dying minutes, which accounted for their 12 points.