The second day of the Coca-Cola under-13 Craven Week in Durban saw Western Province march on towards a possible spot in Friday’s prestigious final game of the week following their 10-8 win over a very good Valke side in the day’s concluding fixture.

The game was a thriller, between two evenly matched teams and the Valke had an opportunity to force a last-minute draw when they scored a try close to the posts, but the conversion went wide and Western Province were able to keep their unbeaten record.

Province were easily the most impressive side on the opening day, but their skillful backs were given far less possession to run with by the Valke, and the defence of the East Rand side, with centre Franco Wagenaar in the van, cut them down when they did look like breaking out.

In the end, it was the forwards who got the try that sealed the game for Western Province, with flank Benjamin Van Schalkwyk barging his way over from close in to put them 10-3 up ahead of the last gasp try by Ulrich Wiese closed the gap to two points. 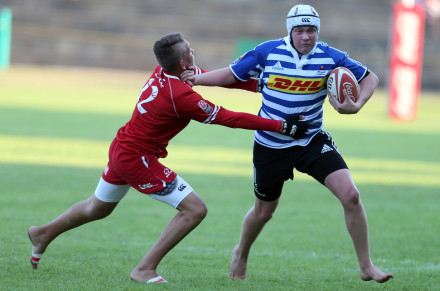 The Valke, who beat Namibia in their opening game looked like one of the best teams on show so far and they will, hopefully, be given a good fixture on day three and still be in with a chance for one of the late time slots on the last day come Friday.

The other side to impress on day two was Eastern Province who beat the Golden Lions 22-7 and looked full of skill and determined running. They scored three tries, via Siyamthanda Hallom, Michael Paddock, and Enrico Bantom. The Lions could only manage one try, scored by Franku Muller.

Border managed to keep their unbeaten record, although they were given a stern test by the Limpopo Blue Bulls and scraped home 14-12. Border romped home against the Blue Bulls on day one.

It didn’t get any better for the Blue Bulls on day two. They went down 19-17 to SWD, while Free State also lost their second game in a row – 24-12 to the Pumas.

It was also a bad day for the hosts, KwaZulu-Natal. They lost 14-6 to Boland – their second loss, following their reversal to the Lions on the first day.

There are just six teams who have won both matches so far. In addition to WP, EP and Border, the Griffons, SWD and the Leopards have managed to make it two out of two.

Wednesday is a rest day at the week, play continues on Thursday, with the teams playing their last fixtures at Kings Park on Friday.

About The Coca-Cola Company

The Coca-Cola Company (NYSE: KO) is the world’s largest beverage company, refreshing consumers with more than 500 sparkling and still brands. Led by Coca-Cola, the world’s most valuable brand, the Company’s portfolio features 15 billion dollar brands including Diet Coke, Fanta, Sprite, Coca-Cola Zero, vitaminwater, Powerade, Minute Maid, Simply and Georgia. Globally, we are the No. 1 provider of sparkling beverages, juices and juice drinks and ready-to-drink teas and coffees. Through the world’s largest beverage distribution system, consumers in more than 200 countries enjoy the Company’s beverages at a rate of 1.7 billion servings a day. With an enduring commitment to building sustainable communities, our Company is focused on initiatives that reduce our environmental footprint, support active, healthy living, create a safe, inclusive work environment for our associates, and enhance the economic development of the communities where we operate. For more information about our Company, please visit our website at www.thecoca-colacompany.com.