The 2014 Under 13 Coca-Cola Craven Week is under way at Glenwood Boys’ High School in Durban and everyone here is in agreement that you would go a long way to find a tournament that has gotten off to better start.

The local organizers have been helped, of course, by the balmy East coast weather – which is being lapped up by the inland teams and their supporters, and Glenwood with its stands, pavilions and lush green field is the perfect venue for a week like this.

The Sharks Union pulled off a major coup by getting their Super Rugby squad involved. They spent the opening day at Glenwood – and they were all there, Springboks included. In a great move, the players joined the provinces that they were affiliated to as schoolboys for the march-on at the opening ceremony, and the team held their practice session on the field at the end of the day’s play.

The under-13 Coca-Cola Craven Week is all about rewarding players at the end of their primary school rugby careers, and about motivating them to continue their development when they go to high school next year. The participation of the Sharks on the opening day certainly went a long way towards achieving those goals. 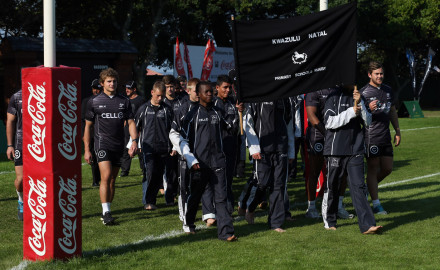 Yusuf Jackson, SA Rugby’s manager of amateur rugby, who is at the week in Durban, stresses the fact that this particular week is about giving the current top primary schools players an opportunity to compete on a national stage.

“We are aware that these players are at the start of their rugby careers. The under-13 Coca-Cola Craven Week features the early developers and we don’t pay too much attention to results at this stage,” he said.

“So, this week is all about participation, and about making the provinces aware of the young talent they have in their ranks. There’s no point in trying to identify future stars at this stage because there are many players who are not here who will develop physically in the years to come.”

At the same time, however, it’s important that no talented players should fall through the cracks and there are enough agents and marketing people from the top rugby schools around the country to ensure that that doesn’t happen.

Fetsi Mbele, Coca-Cola South Africa Marketing Assets Manager tells us that the goals of the tournament also extend further than what happens on the field, “Not only does the Under-13 Coca-Cola Craven Week unearth talented youngsters it also teaches them to live a healthy and active life through their sport of choice.”

For the spectators, in the meantime, it’s been a feast of barefoot rugby, on a lush emerald field, in Durban’s sub-tropical winter sunshine – it doesn’t get much better than that.

About The Coca-Cola Company

The Coca-Cola Company(NYSE: KO) is the world’s largest beverage company, refreshing consumers with more than 500 sparkling and still brands. Led by Coca-Cola, the world’s most valuable brand, the Company’s portfolio features 15 billion dollar brands including Diet Coke, Fanta, Sprite, Coca-Cola Zero, vitaminwater, Powerade, Minute Maid, Simply and Georgia. Globally, we are the No. 1 provider of sparkling beverages, juices and juice drinks and ready-to-drink teas and coffees. Through the world’s largest beverage distribution system, consumers in more than 200 countries enjoy the Company’s beverages at a rate of 1.7 billion servings a day. With an enduring commitment to building sustainable communities, our Company is focused on initiatives that reduce our environmental footprint, support active, healthy living, create a safe, inclusive work environment for our associates, and enhance the economic development of the communities where we operate. For more information about our Company, please visit our website at www.thecoca-colacompany.com.