In an effort to prevent used motor oil pollution, the Eden District Waste Management section engaged with Recycling Oil Saves the Environment Foundation (ROSE) and National Oil Recycling Association of South Africa (NORA SA), in collaboration with the following local municipalities: Bitou, Knysna, Mossel Bay, George, Oudtshoorn and Hessequa. Emerging from the engagement it was decided that containers (Enviro Centre facilities) be placed at specific waste disposal sites where the public has access to dispose of used motor oil and oil filters free of charge. Approximately 270 million litres of new oil is sold per year in South Africa, but approximately only a recorded 100 million litres of the used oil is recycled. 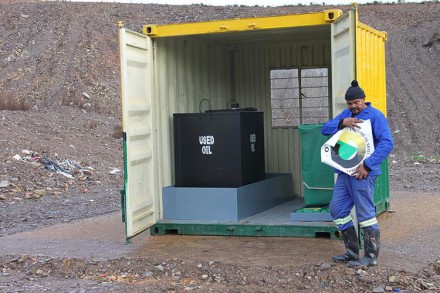 The majority of vehicle service centres and industries within the Eden district make use of accredited service providers to collect and recycle used-oil. Unfortunately, the majority of DIY vehicle mechanics, backyard mechanics and households do not make use of such service providers which result in used motor oils are being dumped in storm water drains, damaging the environment. It has been scientifically proven that one litre of oil can contaminate up to one million litres of drinking water.

An increase in the number of motor vehicles and mechanical equipment means an increase in the amount of motor oil produced and used. Motor oil has to be managed or disposed of by means of a legal process.
The following devastating repercussions on the environment are possible:
• Contamination of ground and surface waters;
• Health problems to humans, pets, wildlife and marine;
• Threat to the survival of fresh-and sea water organisms; and
• Wetland ecosystem collapse.

Members of the public and informal businesses are encouraged to work together to save our precious environment for future generations. Please make use of the Enviro Centre facilities.

Caption: Reon Sauls, Senior Worker from Hessequa Municipality during the branding of the Enviro Centre Facility based at Steynskloof Landfill site.