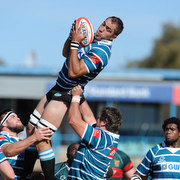 The GWK Griquas will play in the Absa Currie Cup Premier Division this season after outplaying the SWD Eagles 57-12 (half-time 31-0) in their vital qualifying match at Outeniqua Park in George on Saturday.

The dominant Griquas scored their bonus try before halftime already and led 31-0 at the break.

Griquas had to win with a four-try bonus point to ensure that they could not be caught by the chasing Leopards, who were second on the log heading in to the final week of qualifying matches and just one point behind. Griquas finished the qualifiers unbeaten after six matches.

The Leopards won five of their six matches, losing their decider 33-32 against Griquas.

On Saturday in Potchefstroom, the Leopards crushed the Border Bulldogs 103-15 after leading 54-3 at halftime already.

Junior Springbok wings Luther Obi and Sylvian Mahuza helped themselves to four tries each. However, their efforts proved to be fruitless in the end after a determined Griquas outfit had easily outplayed the Eagles in their televised clash.

Griquas were dominant from the start at picturesque Outeniqua Park and they wrapped up the crucial bonus-point try in the first half when No 8 Carel Greeff and hooker Ryno Barnes each scored two tries.

In the remaining fixture played on Friday afternoon, the Down Touch Griffons overcame a 10-point deficit on their way to a 29-20 (halftime 7-10) win over the Valke in Welkom.

Griquas opened their account early in the first half after scrumhalf Tian Meyer collected his chip kick with Barnes on hand to crash over from a ruck. They grabbed their second try five minutes later after Greeff had muscled his way.

SWD had no answer to Griquas’ pace and power and they conceded their third try in the 28th minute, when outside centre Jonathan Francke broke from a ruck to sprint clear for a converted try.

Griquas scored that vital fourth try two minutes later when right wing Ederies Arendse scooped up a loose ball to dot down in the corner, stretching the lead to 24-0. Greeff collected his second try just before the break when he powered his way over after a scrum.

Four minutes after the break tighthead prop Maks van Dyk crashed over for a converted try after good work from flank Marnus Schoeman.