Casual Day is on Friday 5 September 2014

Casual Day ambassadors Khumo Moyane and Bernadette Rigney are on the July/August cover of Rolling Inspiration magazine. The cover is appropriately celebratory and shows of Casual Day’s Bring out the Bling theme. 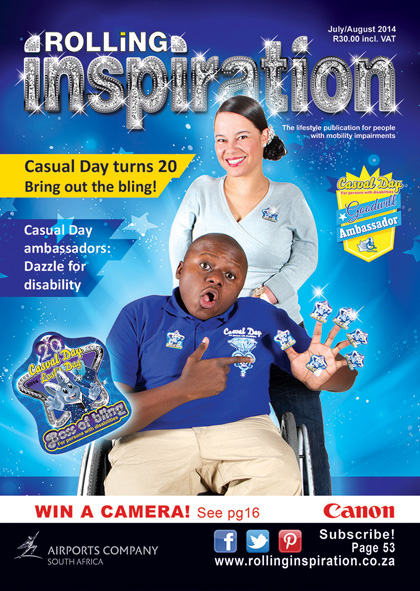 Casual Day celebrates its 20th birthday this year. Casual Day fans are encourage to put on their dancing shoes and dress up, not down – and to dazzle for disability. Casual Day is on Friday 5 September.

“We have been dressing casually for the past two decades, but this year is a special occasion. So our message to you is to rustle up a little razzle dazzle. Casual Day is all about fantasy and dressing up in things you can find around the house. Be creative with glitter, fabric, shiny paper or just wear your sticker and a posh casual attitude,” says Casual Day project leader Celeste Vinassa.

“This year we have printed 3.5 million stickers and we need everyone’s help to raise donations for these stickers. We don’t just sell stickers on one day, we must start now to make this year a success.”

Casual Day has appointed an awesome group of ambassadors who are campaigning for the rights of all persons with disabilities to be fully included in mainstream society. “They speak from experience and knowledge about disability,” says Casual Day project leader Celeste Vinassa. “It’s called ‘self-advocacy’. They are all people who have overcome great adversity, and are now ready to help Casual Day with its evolution. Casual Day changes lives one R10 sticker at a time. Our ambassadors are there to give society a deeper understanding of the world of disability and how to make the world a more respectful and nurturing place for everybody.”

Bernadette Rigney, Transformation and Disability Awareness Officer, City of Johannesburg, has a rare condition called Arthrogryposis, which affects the joints and limits the range of motion in her hands and legs.

Bernadette is the founder and director of fAbility, a company which shares innovative ideas and technology to assist and improve the lifestyles of persons with physical disabilities. “With all eyes on us, we may as well keep it fabulous!” she says.

One of the first tasks she has chosen is to get all her colleagues and employees of metros all over the country to participate in Casual Day.

She joins the charismatic Khumo Forbes Moyane, who became a Casual Day ambassador last year. He was born with a rare disease called Osteogenesis Imperfecta (OI) is a genetic bone disorder characterized by fragile bones. It is also known as “brittle bone disease.” The term literally means “bone that is imperfectly made from the beginning of life.” A person is born with this disorder and is affected throughout his or her life time.

“Casual Day allows me to tap into my inner talent which is to motivate and inspire people and youth. I enjoy what I do because it is about changing people’s life in a very good way,” says Khumo.

All our national beneficiaries are committed to advancing the rights of persons with disabilities – and are representative of a spectrum of conditions and disabilities. They are:

National Council for Persons with Physical Disabilities in SA

National Institute for the Deaf

Rolling Inspiration is a lifestyle publication for persons living with mobility impairments and is published under contract for the QuadPara Association of South Africa (QASA) by Word for Word Media cc, an empowered equal opportunity company with national reach based in Gauteng.

It is on the shelves but also available in an online version. To subscribe to Rolling Inspiration go to www.rollinginspiration.co.za

Participants are encouraged to dedicate the day to Casual Day, devising their own capers, events, functions and missions. Casual Day puts the fun into fundraising.

Keep abreast of activities at Casual Day on our Facebook page at www.facebook.com/CasualDaySA