Satirical, controversial and fearless in the socio-political themes it tackles – that’s The Boondocks, the hit adult animated series that returns to Sony MAX on Friday 29 August 2014 for a fourth season of politically incorrect comedy. 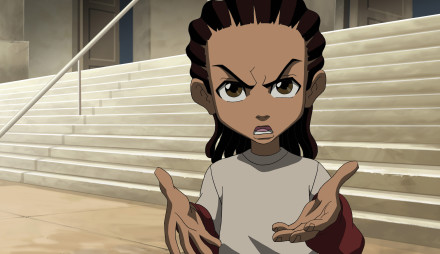 This cult American anime-meets-manga styled sitcom, originally created by Aaron McGruder and based on his comic strip of the same name, has taken the world by storm since it premiered nine years ago.

Audiences have been waiting four long years for the fourth season of The Boondocks, comprising 10 episodes of 30 minutes each. Arriving on South African screens hot on the heels of its United States cable-TV broadcast, which ended in June to record ratings (even beating the NBA playoffs), this channel premiere will be aired on Fridays at 21:30 on Sony MAX (DStv channel 128).

The show follows the adventures (and misadventures) of two black boys, the politically conscious Huey and the rap-loving Riley Freeman. Raised on the mean streets of Chicago, they experience a severe culture shock after moving to the leafy, peaceful and mainly white “boondocks” to live with their irascible grandfather.

Season four is set to continue with this darkly comic tell-it-like-it-is yet approach. Included are the episodes “Breaking Granddad”, in which the Freemans get into trouble for selling, well, not quite crystal meth a la Walter White, but an equally dangerous hair product; and “Granddad Dates a Kardashian”, in which he stars in a reality show and starts romancing a newly discovered Kardashian sister.

The laughter will no doubt be laced with discomfort when Huey and Riley are trapped inside a new slavery theme park and forced into unwitting slavery, and when Granddad finds that the Siri virtual personal assistant on his iPhone has become obsessed with him. Plus, Riley becomes the target of gay rights groups when he calls a classmate “gay”, and Stinkmeaner is back – or, at least, his clone is.

The Boondocks is black comedy at its probing, entertaining best, as borne out by its NAACP Image Awards nomination and its Peabody Award, as well as the heaps of critical praise that it has elicited.

San Francisco Examiner critic Jeffrey M Anderson wrote: “Each episode is beautifully crafted, with an eye on lush, shadowy visuals and a pulsing, jazz-like rhythm … the show is almost consistently funny, consistently brilliant and, best of all, compulsively watchable.”

For biting socio-political commentary laced with clever satire, don’t miss the fourth season of The Boondocks – exclusive to Sony MAX, on Friday nights at 21:30 from 29 August 2014.