Albert Frost and Robin Auld will be performing together at the Far Hills Country Hotel, N2, Wilderness. On the deck under the big tent with the rolling hills in the background, this promises to be a most enjoyable way to spend a lazy Sunday afternoon. Starts 3pm.  R80. Tel 044 8890120 or info@farhillshotel.com, http://www.farhillshotel.com.

Albert Frost is a familiar and respected feature of the South African blues rock music scene.

For the past 20 years, the energetic performances of this accomplished guitarist have dazzled audiences as he deftly alternates between rhythm and lead, while showcasing acoustic and electric guitars. His first love is blues, stemming from the influence of his long relationship with the Blues Broers with whom he has performed since 1994 – 20 years. The Blues Broers have recently been very active again, releasing new material in Out of the Blue (2012) and Into the Red (2014.) Earlier this year a live recording of the Albert Frost Trio in Grahamstown was also released.

He has recorded with Arno Carstens, Koos Kombuis, Chris Chameleon, Blues Broers and many others. He has performed with every major artist in South Africa, and with international artists like Ali Faka Toure and Finley Quaye. He has toured with Simple Minds and Rem, and supported the Rolling Stones.

His patent enjoyment of the music he performs and his instruments as well as his charming rapport with the audience, keeps his admirers captivated and returning for more.

“Frost is one of the most versatile and talented guitarists in South Africa. Seeing him wield his myriad axes is a lesson in what is possible with a guitar. ” Murray Walker, What’s On, July 2013.

Call me with Blues Broers: https://www.youtube.com/watch?v=qGzkuGYp1Wc 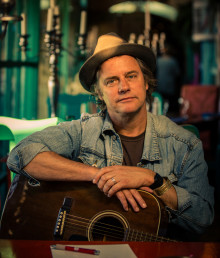 Slide guitar, harmonica, African blues guitar stylings and soul vocals all feature in the fresh and vibrant roots sound of Robin Auld. An award winning artist with an international CV spanning twenty albums, he is a powerful and accomplished performer either solo acoustic or with an electric trio.

Born in Lusaka, Zambia to Scots parents, Robin’s childhood was spent alternating between Southern Africa and Scotland; a journey reflected in the African and Celtic influences in his music. He learned to play the guitar by listening to Hendrix, Ry Cooder and Neil Young, also absorbing influences from the various guitarists of Southern Africa to make the contemporary mix of his music today.

He had several hits in South Africa with producer Kevin Shirley, who has worked with Led Zeppelin and Joe Bonnamassa amongst others, before embarking on the journey to take his music abroad.  He hasperformed and recorded in New York, London, Glasgow and Nashville, opening for and performing with acts such as Lloyd Cole, Osibisa, Michelle Shocked, Jackson Brown, Seasick Steve and Mud Morganfield.

His latest album,  “Fingers in my Pocket”,  recorded in London, is a collection of roots and blues songs…..Robin describes it as being a ”walkin’, credit card, institutional failure, mean women and a sore head” kind of album..  African influences are never far away though, with a reggae song and even a Cape goema tune to pepper the mix!

More information is available at www.robinauld.co.za

“A genuine and unaffected flowing together of cultural strands. ” Unpeeled UK.