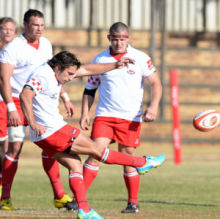 The Valke overcame a halftime deficit to record a 24-19 (halftime 6-13) victory over the SWD Eagles in an Absa Currie Cup First Division match at the Barnard Stadium in Kempton Park on Saturday.

The difference between the teams was an unconverted try 10 minutes from time by J. Oosthuizen. But going into the last 15 minutes, the Eagles held a seven point advantage after centre, Elric van Vuuren slotted his fourth penalty goal.

The Valke still trailed the visitors by two points after Oosthuizen’s try but the home side clinched the game six minutes from time with their second try by Bruce Muller, which was converted Jaun Kotze to move them five points clear.

The sides traded penalties in the first 12 minutes, with Van Vuuren giving the visitors the lead after just three minutes but Kotze replied nine minutes later to level the scores.

Van Vuuren then had the opportunity to regain the lead for the Eagles halfway through the first half, and was on the button.

Despite being a man down thanks to lock Peet van der Walt being sin-binned after 21 minutes, speedy winger Alshaun Bock dashed over for the only try of the first half, which Van Vurren converted to hand the visitors a handy 10-point lead.

Kotze reduced the deficit to seven points with his second penalty on the stroke of halftime to lift his side’s morale.

The Valke flyhalf reduced the deficit to just four points within seven minutes of the restart with his third attempt at goal but Van Vuuren restored the seven point advantage straight from the restart.

Kotze and Van Vuuren traded penalties once more over the following 10-minute period as both sides sparred and jabbed, trying trying to find an opening.

That opening came with 10 minutes to go as Oosthuizen burst over the line in the corner. But the hosts did not give up and came thundering back onto the attack, resulting in Muller’s try six minutes before the hooter sounded.

The Valke hung on for an important victory, after going down 19-14 against the Border Bulldogs last weekend.

The Eagles, who secured an opening round victory over the Leopards last week, still walked away with a bonus point for losing by less than seven points.