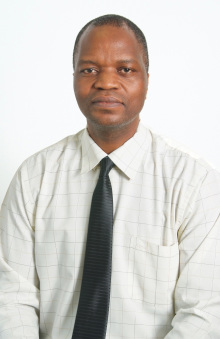 Bongani Mgaga clearly remembers his first job at the age of twelve, where he tended the garden of his mother’s employer every Saturday and earned R3.50 (minus 80c bus fare) for his efforts.  He has come a long way since then, now a Director in the Labour Department at Garlicke & Bousfield.

Bongani was born in Heidelberg and grew up at Osizweni, in Newcastle. He was largely influenced by his father – a strict man who took an avid interest in the law and held great respect for it.  His weekend gardening job led him to his first full-time job when, after successfully completing his matric, his employer took him on as an assistant at his furniture business – as part of the truck crew delivering furniture and cleaning shop.

At the same time, Bongani was playing soccer at a local club and because the club’s manager worked at the Post Office, Bongani asked him, as a favour, to photostat his matric results.  However, when the manager saw how good these were, he suggested Bongani apply for a vacant telephonist position there.  In July 1989, Bongani went for an interview and was duly employed – effectively tripling his salary (an income comparable to what teachers were earning at the time).  “But I couldn’t do ‘Morning, number please?’ for the rest of my life so a year later, I started studying by correspondence with Unisa,” says Bongani.  “It wasn’t too difficult to both work and study because I had the night shift at Telkom so I could come home in the morning, sleep a little, then study for the rest of the day.”

Six years later he applied for a labour relations position within Telkom as they wanted to employ someone who was studying towards a law degree.  He then worked a further ten years for the company in various employee relations positions before moving on to pursue a career as an admitted practising attorney specialising in Labour Law.  In 2005 he joined a respected legal practice in Durban as a candidate attorney, was admitted and enrolled a year later, and ultimately headed the firm’s Labour Department.  After a five year stint there, he advanced his career still further by joining Garlicke & Bousfield in 2011 as a Director.  “I was in a CCMA dispute with one of Garlicke & Bousfield’s senior directors at the time and effectively did my interview on the job,” he quips.  Bongani’s expertise is not limited to his legal practice, however, as he also fulfills a valuable management role, serving on the firm’s Executive Committee.

Bongani has extensive experience in:

When not working or playing chess, Bongani spends time wrestling his grandchild for the TV remote control while his wife and daughter bond over mother/daughter matters.  He says his best days at work are when his cross-examination of witnesses earns him maximum success for his clients.  He says his greatest weakness is that he sometimes spends too much time on things, “Because I want to do them thoroughly.”

Bongani was appointed as an Acting Judge in the Durban Labour Court for the recess roll of December 2013 to January 2014 and feels that the ultimate recognition of a career spent studying and applying the law would be to be appointed to a position of adjudicating.