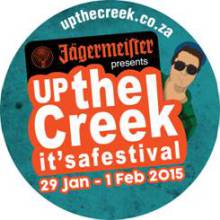 Jägermeister presents Up the Creek 2015 – it`s a festival:

Creekers, we know that you are rambunctiously excited to know which bands will be playing at Jagermeister presents Up the Creek 2015. Bring out the whifflers to clear the path; come closer; hear hear! Round up your friends who suffer from Deipnophobia because their mother-in-laws wear Winklepickers; wake the fudgelling folk and phone your nearest and dearest friends; your annual weekend of sheer joyful abandon at the Breede River awaits!

The good news is that none of our stages will be overlapping, so you will not be subject to spaghettification – that is, “the process by which you would be stretched and ripped apart by such gravitational forces.” Shame on those quomodocunquizing clusterfists that put up callithumpian parades to discombobulate the audience. What a waste! Do it properly we say!

With no further ado then dear folk, herewith the first band confirmations of our fabulous 2015 line up:

That is why we will give you a breather before we announce more bands  in October!

Sign up for a 2015 sticker and stand the chance of winning awesome prizes:

We would love to send you a postcard and your very own Up The Creek 2015 sticker for your car’s back windscreen, directly to your postbox. Fill in your details here (https://www.facebook.com/UpTheCreek.MusicFestival/app_128953167177144 ) and look out for that friendly envelope in your mail.

Once again Sedgwicks Old Brown are sharing the warmth and creating a food court like no other. Under their Bedouin you’ll be privy to a comfort and vibe as only Sedgwicks can share.The Cape Town food trucks contingent are journeying up to the Creek to bring you the widest range of delicious food. And in true Sedwicks style it just keeps getting better, your breakfast will be accompanied by live music next year and giveaways will be a plenty. Groking won’t be accepted (when is it ever!?) but you can absolutely bibble away to your hearts` content.

If you want to rock out in a little more comfort, then the Heartbreak Motel is for you. There are two options of pre-pitched tents, hot showers, toilets, buffet breakfast and other luxuries.

Tickets:
Ticket sales are open: R750.00 at http://utc.nutickets.co.za/ – Tickets are for whole weekend access only (arrive any day Thurs – Sun).

We will keep next year’s festival the same comfortable size you’ve come to love, however unfortunately no under 18`s at Up the Creek 2015.

*Here’s page 2 of our always growing Up The Creek dictionary:

Whiffler – noun. Somebody who walks in front of you through a crowd, waving a chain or an axe in order to clear your path.

Fudgel – verb. Pretending to work when you’re not actually doing anything at all.

Deipnophobia –noun. The morbid fear of dinner parties especially when the in-laws are involved.

Winklepicker –noun. Style of shoe or boot in the 1950s with a sharp and long pointed toe.

Quomodocunquizing – verb. “To make money in any possible way.” It’s been used in 1652 by Thomas Urquhart, who wrote: Those quomodocunquizing clusterfists and rapacious varlets.

Callithumpian – noun. Refers to a band of discordant instruments or a noisy parade.

Groke – adv. To look at somebody while they’re eating in the hope that they’ll give you some of their food.

Baffona –noun. A woman with a slight moustache.