With an objective to celebrate 20 years of discovering new talent in the world of arts and culture, the long awaited Taung Cultural Calabash Festival took place over 4 days in Taung, North West starting from Thursday, the 25th of September with the gala dinner up until Sunday, the 29th of September 2014 with the pop- jazz festival. 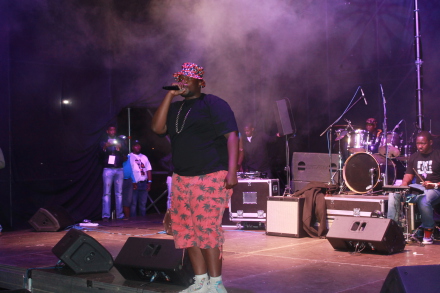 On Friday, arts performances by Taung talent followed by a comedy show took place at the Mmabana Main Theatre where comedians, Chris Mapane and Skholo Mayisa left the audience in stitches. A great take off it was as the Chief of Taung also graced the people with his presence by attending the show.

On Saturday, the line-up comprised of the likes of HHP, DJ Sbu, DJ Bongz, Donald, Lection, DJ Harvey, DJ Spaara, DJ Tiro, DJ Ginger and Ntwana Ya Taung. The pop- jazz festival on Sunday had some soothing melodic sounds by the likes of Brenden, Musa, Vusi Nova, the Jaziel Brothers, The Soil, Brian Temba, Sifiso Ncwane, Zahara and many more. TV personalities, Simphiwe Ngema (known as ‘Thuli’ on SABC 2’s Muvhango) as well as Rhythm City actor, Dumi Masilela held it down on both days as the MCs for the event. Spotted TV personalities at the event include Isibaya actresses, Lorraine Mphephi and Florence Mokgatsi (‘Pam’ and ‘Lerato’ on Isibaya respectively).

Acknowledgements to the National Lottery Distribution Trust Fund, Mmabana Arts, Culture & Sports Foundation, the North West Department of Culture, Arts and Traditional Affairs, the Greater Taung Local Municipality as well as the whole community of Taung and all those who travelled from all walks of South Africa for coming to witness the fun-filled festival. A massive success it was and thus, let’s do it again next year!

To catch all the updates about the event: