JOHANNESBURG: Time flies when you are blazing trails. Just under a year ago JOOP! HOMME South Africa announced a groundbreaking campaign to find its first African brand ambassador. 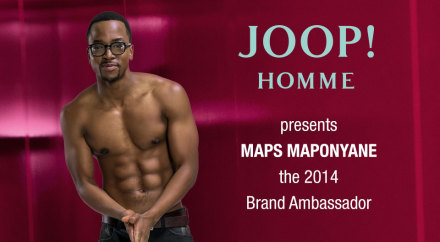 The proposition was tantalising: Lunga Shabalala and Maps Maponyane, models and tv presenters with pedigree in the sexy stakes, were to compete in mental, physical and seduction challenges in full view of the public through an online video series and social media. There was only one winner and the public voted in Maponyane, who has been the Ambassador since November 2013.

“It has been an amazing ride, I can’t believe it is already over. The Joop! Homme experience has been a life-changing one and I am honoured to have been part of making history with a brand of such heritage,” said Maps.

It is with mixed feelings that Joop! Homme South Africa announces the end of Maponyane’s reign as brand ambassador. While it is sad that his time has come to an end after being an exemplary ambassador, it with great excitement that they look ahead to the announcement of the brand’s ambassador for 2014/15.

Commenting on the announcement from Paris JOOP! HOMME Marketing Director Charlotte Le Carpentier said “Maps’ appeal and confidence has brought a lot to the JOOP! HOMME fragrance in South Africa. We are extremely proud of this collaboration and are looking forward with excitement to reveal the new seducer who will represent Joop! Homme. “

“The first ever Joop! Ambassador campaign for South Africa has been a fantastic success. We have received spectacular support and could not have asked for better participants than Maps and Lunga. The question on everybody’s lips now is: who will be the next sexy, ambitious and seductive Joop! Homme ambassador for South Africa? Some things in life are worth waiting for .”

During the build up to the announcement Joop! Homme will be running a teaser campaign encouraging the public to guess who the new ambassador is and stand a chance to win fifteen thousand rand and weekly spot prizes. Stay in touch with the campaign on: www.joophomeeza.com \  facebook/joophommeza \ @joophommeza on twitter \ joophommeza on instagram.

What does the Joop! Homme Brand Ambassador stand for?

The energy of today, Positive Provocation and doesn’t take himself too seriously

Joop! Homme is the quintessential success story: Top 10 fragrance since its launch – 20 years ago and with excellent product awareness: 1/5 English men & 1/10 German men used it during the last 12 months

JOOP! Homme is a fragrance of contrasts: Cool and spicy, Warm and sexy!

Joop! Homme plays in the space where opposites attract and it remains a statement of masculine sensuality. It is an iconic and unique pink fragrance for real men, hence the tagline: Real Mean Wear Pink

Launched in 1989 by German designer Wolfgang Joop, the fragrance is not only considered to be an aphrodisiac, but also a timeless oriental fragrance for men.

*Prices subject to change. **Above mentioned prices are the new Prices from January 2014 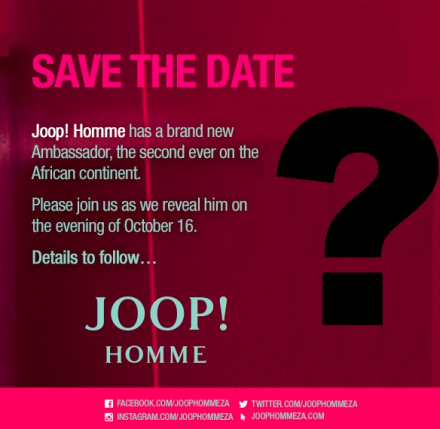