Van Loveren’s Five’s Reserve Pinotage 2013 was recently honoured with the Trophy for the Best Fairtrade Red Wine during the 2014 Michelangelo International Wine & Spirits Awards – one of only 15 trophies on which the more than 1 500 entries had their sights this year. 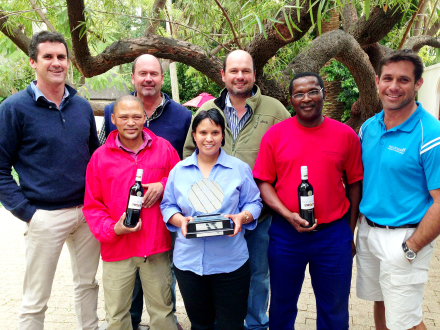 According to Arianna Baldo, Executive Director of Fairtrade SA, this prestigious accolade is annually awarded to the best red wine entry that is also Fairtrade registered and adheres to their strict requirements. “This trophy confirms that Fairtrade wines such as Five’s Reserve Pinotage can be true to ethical and sustainable principles and still be of world-class quality.”

Van Loveren CEO Philip Retief says the trophy celebrates the success of their employee empowerment project, the De Goree Boerdery. “All the grapes used for Five’s Reserve are bought from De Goree and as quality grapes are a prerequisite for the creation of a quality wine, this award is a pat on the back for the shareholders.” Van Loveren’s Fairtrade certification affirms its commitment to the improvement of the production and economic circumstances of its workers.

De Goree also owns a share in the Five’s Reserve brand which gives them access to the complete value chain. “The Five’s Reserve brand pays a Fairtrade premium to De Goree – an amount that is utilised according to their prioritised needs,” says Retief. “This year the available funds contributed towards a bursary fund for the children of the workers, for school and transport fees, school clothing, training courses and Christmas vouchers for the community.”

All permanent staff, including those who do not form part of the shareholder project, benefit from a Five’s Reserve profit pool.  “This year the brand performed exceptionally well and the pool was four times larger than previous years,” Retief says. “Profit sharing took place for the ninth time and a total amount of R1.05 million has been paid to staff – while R450 000 was used towards bursaries and the raising of education levels.”

Van Loveren and 116 of its staff members and pensioners (including 52 women) bought a 138-hectare grape farm in the Robertson wine valley early in 2006. The 52% majority of this enterprise, called De Goree Boerdery, is owned by the workers trust and the balance by the Retief family. De Goree Boerdery has a long-term contract to provide Van Loveren with grapes for its famous wines – an agreement that put the farm on a sustainable footing right from the start. Van Loveren launched the Five’s Reserve wine range – including a white wine, a rosé and two red wines – to coincide with the start of this project.

“Our project is by no means stagnant,” says Chrisjan Williams, assistant manager and trustee of the De Goree worker trust. “We are making good progress with continuous extensions in line with our vision. For example, we recently obtained 30ha of water and in 2015 and 2016 we plan to augment the current 53ha of vineyards with another 18ha per year.”

The De Goree Boerdery is widely viewed as a model empowerment project. In 2008 the project won the National Agri BEE Project of the Year award and in 2009 it was rewarded with a National LandCare award for its efforts to eradicate alien vegetation and to farm sustainably. Jonas Cupido, shareholder and winemaker of the Five’s Reserve wine range, was also named the SA Cellar Worker of the Year in 2009. During the same year, the farm became the first farm in the Robertson wine valley to receive its Fairtrade accreditation.

The De Goree partnership is indeed exceptionally successful and Van Loveren is using this concept as model for future empowerment projects.

Visit www.vanloveren.co.za for information regarding Van Loveren’s wines and more reasons to visit the farm.