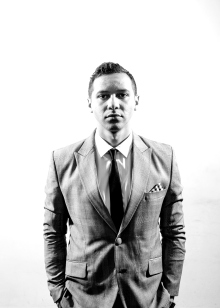 The History:
AWEdnesday was born three years ago and has been held the last Wednesday of every month come rain or shine. GOLIATH AND GOLIATH at the Lyric will feature eight top notch, for a two and a half hour long show, and will include comedians, – Conrad Koch/Chester Missing, Trevor Gumbi, Stuart Taylor, Richelieu Beaunior and of course, Donovan, Jason and Nicholas Goliath who will all take to the stage.

Starting out with a small club gig called AWEdnesday they now run six comedy gigs across Johannesburg.  They have created a very welcomed platform for aspiring comedians and legends as well as a space for all comedy lovers new and old. Their mission to increase the profile & accessibility of comedy in South Africa has certainly been accomplished.

GOLIATH AND GOLIATH started with the three Goliath boys & a Goliath girl. Donovan, Jason and Nicholas and their boss lady, Kate Goliath and have grown to include nine comedians in their stable. Each year has seen a steady growth of success and this year is no exception. It has been a big year of firsts for South Africa’s favourite comedy family.

Critical Acclaim:
For the first time this year, GOLIATH AND GOLIATH hit the National Arts Festival in Grahamstown for the first time this year. The shows proved a massive hit with
festivalgoer’s. Two out of their four shows were completely sold out with standing ovations across the board with requests from the audiences to please bring the show to their towns and positive reviews in the press.

Five comedians out of the GOLIATH AND GOLIATH team of nine were nominated at the Savannah Comics Choice Awards earlier this year. Loyiso Madinga, Alfred Adriaan and Glen Biderman-Pam were nominated in the Best Newcomer category with Loyiso being named winner. Jason Goliath and Donovan Goliath have been nominated in the Best Breakthrough category. This was the third nomination in a row for both Jason and Donovan.

It doesn’t stop there; the Goliath talents are not just restricted to comedy. The addition of actor and dancer may soon be included onto the already impressive profiles of Jason and Donovan respectively. Jason is currently featured on the second season of the popular comedy sitcom Ses Top La and Donovan was a contestant on one of South Africa’s favourite reality shows, the highly anticipated new season of Strictly Come Dancing.
Ses Top La CURRENTLY screens on SABC1 every Monday and Wednesday at 7:30pm and Season 7 of Strictly Come Dancing aired on SABC 3 every Friday at 8pm.