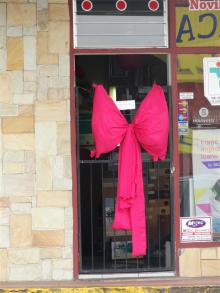 SOUTH AFRICA (October 2014) – The final stretch lays ahead for the non profit organisation Pink Trees for Pauline. Only a week to go until the national Pink Trees for Pauline celebrations which takes place on 17 October 2014 and more than 50km of the signature pink material has been wrapped around thousands of trees, pillars, buildings…anything you can imagine!  The pink wave we witnessed sweeping over the country during the 2013 drive is picking up momentum, only this year it is bigger and the impact on the country and its people is significantly more powerful.

Adri van Nieuwenhuizen, MD of Pink Trees for Pauline, confirmed that delivering the kilometres of material is a logistical challenge and nearly impossible to explain.  “We rely on the hearts of people who travel nationwide to far off paces even couriers take days to get to.  Aesthetic Concepts & Gifts helps tremendously to despatch material from Gauteng.  On the national routes the amazing people of Anton le Roux Vervoer, Golden Harvest, Aramex and Triangle Couriers transport the bulk of the material. But to get material from Johannesburg to places like Stutterheim, Pniel, Grabouw, Outjo, Theunissen, Koster, Melkbosstrand, Velddrif we have to rely on people who open their hearts and vehicles for us.”  Van Nieuwenhuizen explained that the wrapping of trees is such an emotional process for people that they dare not to disappoint anyone by not delivering.  “Whether it’s an order for 500m or for 2m, you just have to make a plan, that’s it.” 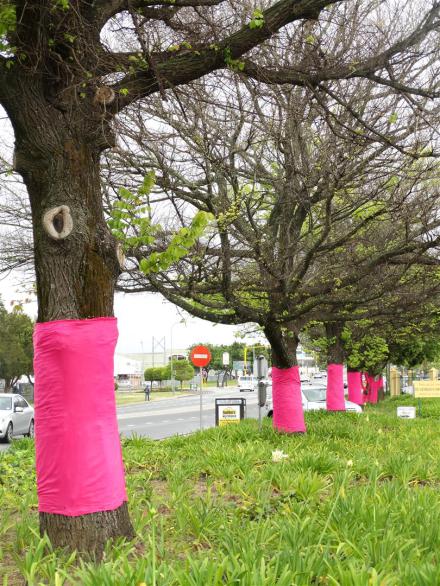 The ingenuity with which people approach this year’s project is evident from the variety in the celebrations planned from the 17th of October right until the end of November. The feisty ladies of Hangklip challenged the ladies of their community to be wrapped in pink material for a stylish photo session..all above board though!  Alda Mills of Plettenberg Bay says that Pink Trees for Pauline Plett will, like in 2013, host a skydiving day. Yes, you heard it here first! They plan to sponsor daredevil cancer patients to skydive and have some extreme fun on 31 October 2014.  The community of Despatch will have a celebratory and thanks giving service at their church on 18 October 2014…but to name a few of the inspiring events planned.  Adri van Nieuwenhuizen also confirmed that material will be sold until the end of November 2014 because a lot of people become aware of the project on the day of the national celebrations on 17 October. 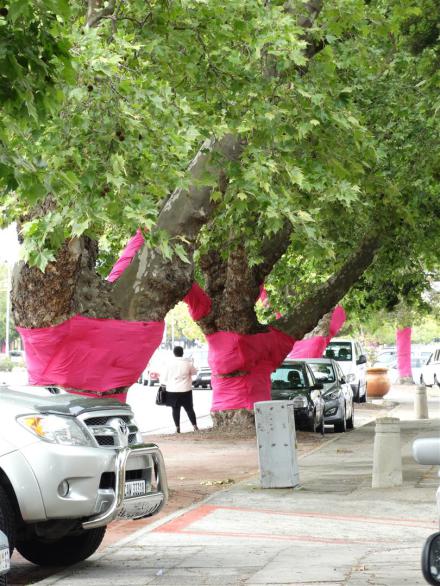 For more information visit www.pinktrees.co.za and for daily updates visit the Pink Trees for Pauline Facebook page. To speak to Adri van Niewenhuizen you can contact her on 082 460 6386 or email adri@pinktrees.co.za.