South Africans have a lot to be proud of. We are rated third in the world in supplying safe, drinkable tap water, and despite Eskom’s bad reputation, we enjoy some of the cheapest electricity in the world. More than these basic human necessities, our colourful nation draws visitors from near and far for its natural beauty, world cities, people and unique wildlife. The diversity South Africa offers is unparalleled to many other countries – you can be reclining on a beach in Cape Town in the morning and by the afternoon you could be jostling from side to side on a game viewing vehicle in the Kruger National Park.

In April, Stats SA noted a record number of visitors to our shores with nearly one million tourists visiting South Africa in December 2013 alone. Cape Town continues to capture the imagination of the global community with the city continuing to receive many accolades throughout 2014.

Each of the destinations you see below is numbered; however, don’t take this as a ranking or rating. There’s no bias here; this is simply 101 of the best destinations in South Africa.

As popular as the ostriches are in nearby Oudtshoorn, the Cango Caves is a 20-million year-old system of caves that cut deep into the limestone. Located just 30km from Oudtshoorn in the Klein Karoo, the caves are considered one of the world’s great Natural Wonders. These vast hidden chambers make up Africa’s largest cave system and were inhabited all the way back in the Stone Age. They have been a popular South African tourist attraction since they were discovered in the 1800s as they boast some of the largest stalagmite formations in the world. Not all of the caverns are open to the public but those that are offer an amazing subterranean adventure through chambers and tunnels. One of the highlights of a visit to the Cango Caves is Cleopatra’s Needle, a 9m-high formation that is believed to be more than 150 000 years old!

South Africa’s famous Klein Karoo sex shop is anything but; Ronnie’s Sex Shop is actually a popular pub and a regular stopover for locals, as well as bikers and visitors to the area. Located on Route 62, the shop which is named after its owner, began as a farm stall selling fresh produce to passersby. However, Ronnie complained of business being slow, so, in a booze fuelled prank, Ronnie’s friends amended the painted “Ronnie’s Shop” sign to Ronnie’s Sex Shop. Suddenly business was booming, and the rest, as they say, is history. The pub is one of the most popular in the Karoo and tourists from near and far stop to photograph themselves next to the sign after enjoying a pint or two.

Oudtshoorn is ostrich country, and a stop at the Safari Ostrich Show Farm 6km from town is highly recommended. The farm, which has been operating since 1956, offers insights into how these large birds are bred. Watch a unique ostrich race with colourfully dressed jockeys racing the birds up to 70km per hour. Here you can also ride an ostrich, take photographs of nests and eggs and feed the tame birds as well as cuddle their baby chicks. The store stocks numerous ostrich products, including leather handbags, eggs and feather boas.

Located on the magnificent Garden Route in the Western Cape, Knysna is a popular resort town, home to some of the area’s most breathtaking scenery, including the famous Knysna Heads. Knysna is built on a natural lagoon, and these two dramatic cliffs guard its entrance in the sea. The Western Head is home to a privately owned nature reserve called Featherbed which visitors can explore, while the Eastern Head offers an observation point with stunning views. One of the more popular trips to Knysna Heads is on a champagne and oyster cruise at sunset. 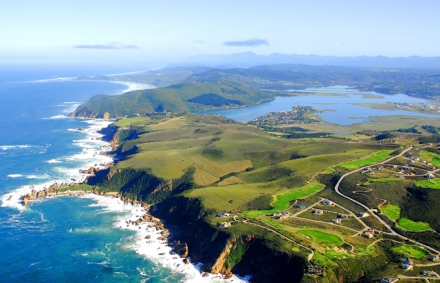 Tee off at Fancourt , one of Africa’s premier golfing destinations with a Links course that was ranked number one in the world by Golf Digest USA. As if its enviable Garden Route location wasn’t enough, the resort is superbly landscaped on 613 hectares of lush countryside set against the moody Outeniqua Mountains.

For many adrenaline junkies, a highlight of visiting the spectacular Tsitsikamma Forest on the Garden Route is to bungee jump off the Bloukrans Bridge. The bridge, which is located 40km from Plettenberg Bay, is the highest single span arch bridge in the world and offers the highest commercially operated bungee jump on earth. Those brave enough walk along a gangway that is tucked under the bridge, before plunging 216m towards the valley below. Of course, the bungy technology ensures their safety, but if you prefer, walking tours of the bridge are also offered.

Embark on a coastal trail of discovery along the famous Otter Trail, from Storms River Mouth through the spectacular Tsitsikamma Forest to Nature’s Valley in the breathtaking Garden Route National Park. This exciting 5-day adventure encompasses 42km of trails on cliff tops along the shoreline, and offers an exceptional diversity of scenery and experiences. Hikers cross rivers and explore fascinating sights en route, stopping off to camp overnight. The Otter Trail is an experience of a lifetime along one of the most beautiful trails in the world.

Baviaanskloof means “Valley of Baboons” in Dutch, and this magnificent narrow valley is a World Heritage Site not only because of its scenic beauty, but also because it’s one of the few places on earth with evidence of human history going back a million years! The valley is a little less than 200km in length and nestles between two mountain ranges, the Baviaanskloof Mountains on one side, and the Kouga Mountains on the other. Here, a variety of wild animals and birds have made their home in a wilderness that is not only scenic but extremely tranquil and remote. 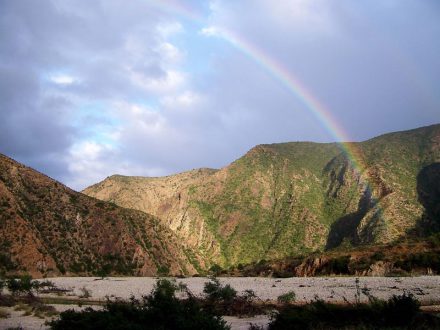 Stretching between Cape Town and Oudtshoorn, and further up the East coast to Port Elizabeth, Route 62, also known as the Mountain Route, is a renowned tourist route through various spectacular mountain passes. It’s far more scenic than taking the national motorway to reach these destinations, which is one of the reasons it’s so popular. Along the route one finds exquisite lush green scenery, sparkling rivers, magnificent mountains and sheer cliffs. The route also covers the Western Cape’s longest wine route, offering the chance to stop off and sample superb wines as you travel along.

The magnificent fairytale Tsitsikamma Forest on the Garden Route is renowned for its exquisite yellowwood trees, which are protected under the country’s National Forests Act. The most famous tree of all is dubbed The Big Tree; at 37m it towers over all the rest, and has been standing here for around 800 years. Located in the forest near Plettenberg Bay and boasting a trunk circumference of 9m, the tree is the largest and oldest remaining yellowwood in the region.

No longer a sleepy seaside town or a hidden gem, Sedgefield is one of the most famous places to visit in the Garden Route, and for good reason. Located within the Garden Route National Park just 490km from Cape Town and between George and Knysna, this scenic little town has just been awarded “Slow Town” status, which means slowing down to nature’s pace. Visitors come here to enjoy spectacular scenery, exquisite beaches and a lazy summer holiday strolling through the village, enjoying the famous Wild Oats Farmer’s Market, and interacting with some of the friendliest people in the province in one of the most idyllic settings on earth.

When we set out to create a list of the best destinations in South Africa we never thought we’d reach 101. But as the research went on, we uncovered even more impressive South African sights that we simply couldn’t leave out.

What are your best destinations in South Africa? No doubt we’ve missed something close to your heart so let us know in the comments below or join us on the Travelstart South Africa Facebook page to discuss.