HARLEY-DAVIDSON® REVS UP IN SUPPORT OF MEN’S HEALTH

Harley-Davidson® is calling all Harley®, pit bike, superbike, cruiser, trike and scooter riders and pillions to join for a parade with a Harley-Davidson® dealership on Saturday 1 November 2014 at 9AM. 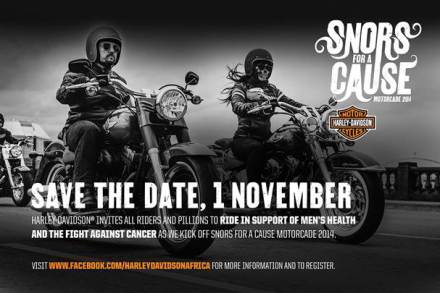 In true Harley form the Snors for a Cause Motorcade 2014 is set to be a first with parades taking place on the same day at the same time at all 10 Harley-Davidson dealerships.  Participating dealerships include Tyger Valley, Cape Town, Clearwater, Gold Rand, Johannesburg, Durban, Pretoria, Big Five, Zambezi and Bloemfontein.  Parade riders will be able to view the new 2015 Harley-Davidson models at each dealership after the parade and enjoy refreshments as well as entertainment.

Embrace the Harley spirit and be a rebel with a cause by registering on www.facebook.com/HarleyDavidsonAfrica and receive a limited edition Snors for a Cause buff for R130. On registration, choose which parade you would like to join and then you will receive a code to collect the limited edition buff at your particular dealership. A limited number of Snors for a Cause pins will be made available to participating riders. Added to this Harley-Davidson Africa will be putting their muscle where their mouth is and donate a minimum of R50 000 for the fight against cancer in men.

We dare you.  Be a rebel and make a difference!

Venue:   All Harley-Davidson Africa Authorized dealerships in South Africa including: