Its only being six seasons since the SWD Cricket has being running the program in Thembalethu and various successes have being achieved. The school played in the final of the Promotion League of the SWD Schools league and is also a feeder school for Thembalethu Cricket Club who was promoted to the SWD Premier League at the beginning of the present season.

This project is an important segment of the development program. Imizamo Yethu Secondary School will play a crucial role in providing Black African School Cricketer for SWD Age group teams. Various players namely Mihlali Gcanga (U/19) and Siyabonga Mbathana (U/17) were included in the SWDSchools teams for 2014.

In May 2014, Siya Nkosana was appointed by South Western Districts Cricket as the High Performance coach. He is assisted by two cricket coordinators for the region to attend to pre-schools (KFC program), primary schools (KFC program and hardball cricket) and high schools (hardball cricket). The appointed elite coach at the school help to assist current school players and coaches and empowering them.

In reaction, Mr Rudy Claassen the President of SWD Cricket, confirmed SWD Cricket’s commitment towards this program. “In order to achieve Cricket South Africa’s Transformation imperatives it will be important that SWD Cricket must continue to strive in the fulfillment of the set goals and to promote the vision of Cricket South and national government for a game played by all”, he said. South Western Districts Cricket in partnership with the Lotteries Board and Western Cape Department of Cultural Affairs and Sport invested an amount of R1,mil in the construction of a cricket facility at Imizamo Yethu Senior Secondary School in 2009. 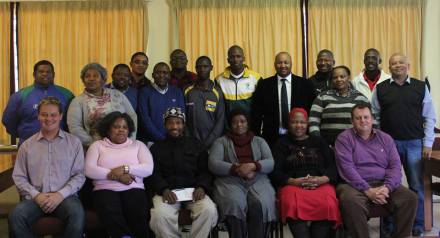