On Thursday and Friday, the 20 and 21st of November, the Southern Cape Fire Protection Association presented 2 days of thanks giving in Hartenbos to the 8 Working on Fire teams appointed to them and launched the start of the summer fire season in the Southern Cape region.

Above: Tug of War competition

Above and below: Toughest firefighter competition

The second day kicked off with a drill parade by the 8 WoF teams and followed with various presentations and speeches by noteworthy individuals such as Winston Smith – WoF assistant managing director, Llewellyn Pillay – WoF managing director, Paul Gerber – SCFPA managing director, Trevor Wilson – NUFPA manager and Collin Deiner, the chief director for disaster management and fire brigade services in the Western Cape. Prizes were also handed over to the winning teams of the previous competition day. 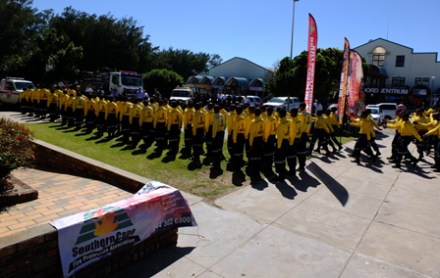 Above: Drill parade by the 8 SCFPA WoF teams

Working on Fire is a government funded job creation program focusing on Integrated Fire Management in South Africa. WoF fire fighters are recruited from marginalised communities and trained in fire awareness and education, prevention and fire suppression skills. During 2009, WoF and the SCFPA formed a partnership and provided the organisation with firefighting teams to service the members of the SCFPA. Currently, they have 8 WoF teams, consisting of 226 firefighters.

Due to the upliftment aspect of Working on Fire, the SCFPA thought it well to provide one of the firefighters with a chance of a lifetime to study for a higher certificate in veldfire management at the Nelson Mandela Metropolitan University (George campus), starting next year. During the event on the Friday, the full bursary was awarded to Norman Malatji, a WoF firefighter based in Crags near Plettenberg Bay.

“I am very excited to study veldfire management next year. I have been a firefighter for Working on Fire for almost two years and have grown a massive interest in veldfires” said Norman, the chosen candidate for the bursary. 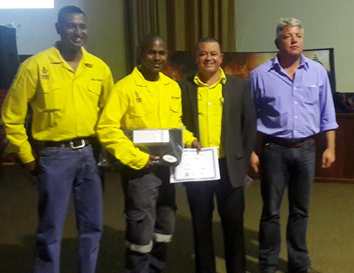 To make the event more exceptional, an aerial firefighting display was given over the ocean by one of the Working on Fire Huey helicopters showcasing various different types of water drops done during veldfire suppression. 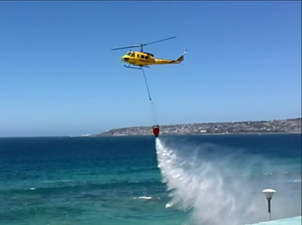 The Southern Cape region has a whole year fire season, as could be seen by the many fires during the past winter. Summer brings higher temperatures, lower humidity, the well-known south-easterly winds and a high inflow of vacationers and tourists, thus increasing the fire danger significantly. The SCFPA request the public to be vigilant this summer and contact their local fire brigade if they see any smoke. Open fires are also prohibited during this period.

The SCFPA is ready for this summer fire season and have to their disposal 8 Working on Fire teams with their own transport, based throughout the Southern Cape region at Goudveld, Crags, Sedgefield, George, Mossel Bay, Riversdale and Ladismith. Aerial resources are also available, which includes 3 spotter planes, 3 helicopters and 2 fixed wing bomber planes. Also, at the SCFPA Knysna office an Advanced Fire Information System (AFIS) terminal and satellite have been set up that act as an early fire detection system and improves response time to veldfires. 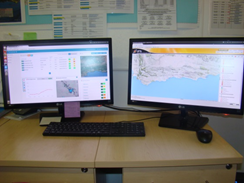 Above and Below: AFIS field terminal and satellite 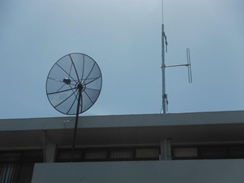 For more information on how to become a SCFPA member, please visit our website at www.scfpa.co.za or phone our office at 044 302 6912.